SINGAPORE - The number of foreigners working here fell by 32,000 last year, the biggest drop in 15 years, even as more locals were employed.

This is the steepest decline in the pool of foreigners employed in Singapore since 2002, when it contracted by 43,000. That year, Singapore was facing an economic slowdown, following the United States' recession in the wake of the Sept 11 terrorist attacks in 2001.

While last year’s fall was mostly among work permit holders in the construction and marine shipyard industries, the number of Employment Pass holders also fell by 4,500 – the first decline in at least six years – according to the latest data released by the Ministry of Manpower (MOM) on Thursday (March 15).

The professional services and infocomm technology sectors were the main ones which employed fewer high-skilled foreigners. In tandem, these sectors saw a growth in local employment, noted the ministry.

Overall, 21,300 more locals were in jobs last year than in the year before. As a result, Singaporeans and permanent residents made up a slightly bigger proportion of the workforce as of December last year, at 67.2 per cent, up from 66.4 per cent a year earlier.

This brought the total number of people employed here, excluding maids, to 3,422,700 as of December.

The shift followed a tightening of foreigner hiring rules in Singapore in recent years.

The ministry said it expects local employment to continue to grow this year, as the economy is expected to expand between 1.5 per cent and 3.5 per cent. But the opportunities will likely be uneven across sectors, with more hiring in sectors such as  manufacturing, infocomms and media, logistics and wholesale trade.

Locals also fared better last year in terms of lower unemployment rates and layoffs, while incomes for Singaporeans also rose, both at the median and 20th percentile levels.

Overall, the seasonally adjusted unemployment rate last December improved from the previous year, to 2.1 per cent, down from 2.2 per cent. 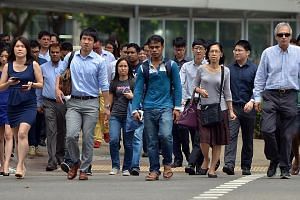 The annual average unemployment rates showed a slight uptick, due to higher unemployment in the first half of the year which subsided over the second half.

Long-term unemployment, or the proportion of the resident labour force out of work for at least 25 weeks, remained stable, at 0.8 per cent.

A plus point for jobseekers was the higher number of job openings last December than the year before, resulting in the ratio of vacancies to unemployed people improving slightly to 0.92, after taking into account seasonal variations. Vacancies are typically seen as an indicator of business sentiment.

The MOM noted that residents were more vulnerable than foreigners to retrenchment in certain industries – information and communications, manufacturing and real estate – where they made up a larger proportion of retrenchments than their share of the workforce.

Most residents who were retrenched were able to find new jobs within six months. This rate of re-entry into employment was about 65 per cent last year, similar to the rate in the previous year, though older workers and degree holders had a harder time than the average worker.

Workers were also more productive. Labour productivity, measured as value-added per actual hour worked, rose by 4.5 per cent last year, up from 1.8 per cent in 2016.

Sectors such as manufacturing, transportation and storage, and wholesale and retail trade performed well. However, productivity fell in the infocomm technology, and accommodation and food service sectors.

The good economic performance likely helped to boost the income of  the average Singaporean in full-time work, with the median monthly income, including employer contributions to the Central Provident Fund, rising by 5.9 per cent over the year to $4,050 last June. After adjusting for inflation, the real income growth was 5.3 per cent, up from 1.3 per cent in 2016.

The MOM noted that this could also reflect more higher-skilled workers in the labour force.

The ministry said more older rank-and-file workers will be retiring over the next few years, so businesses will increasingly need to “focus on upgrading jobs and wages through better productivity and job redesign, in order to attract higher-skilled and younger locals”.

“Employers need to continue to raise productivity by embracing technology and innovation and share the gains from productivity with workers to motivate them,” he said in a Facebook post on Thursday.

Mr Tay, who chairs the Government Parliamentary Committee for Manpower, also called on employers to create inclusive workplaces for mid-career and mature workers, and women returning to work, and to support workers in upgrading their skills.