SINGAPORE - He was 16 when his family relocated to the United States, where his father was posted for work.

While Singaporean Leon Cross saw living overseas as an option, he returned for national service after high school when he was 19 years old.

NS, he said, was an opportunity to gain life experiences and lessons.

"While I would still like to explore opportunities abroad, I believe Singapore is my long-term home," said the 30-year-old. The operationally-ready national serviceman is now a Fire Support Officer at the 772nd Battalion, Singapore Infantry Regiment (SIR).

Lieutenant (NS) Cross said that during NS, he came to appreciate the job opportunities, culture and security in Singapore.

Now a father of four, he lives with his family in Batam, where he operates a spa business.

But he makes sure to return every year for in-camp training (ICT), partly because of the friends he made in the unit. 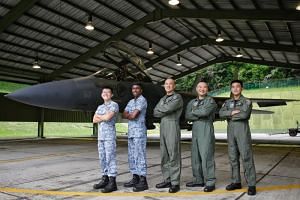 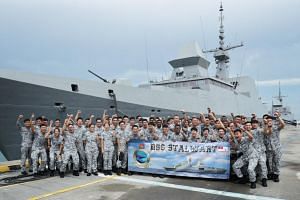 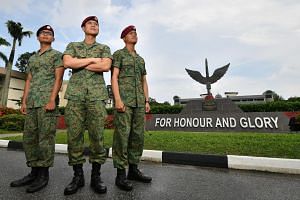 It was such close bonds, as well as drive and discipline that clinched 772 SIR the best NS Infantry Unit award for the second time in three years. The unit has around 500 men in infantry and artillery operations.

Lt (NS) Cross said he has fond memories of his NS days like having to share an apple with four other men in the jungle and feeling spooked together while on a mission in a cemetery.

He said: "As you grow older, the number of friends you can really count on grows smaller."

The 772 SIR is one of 11 NS units and 18 active units to win awards for being the best in their formation.

The Singapore Armed Forces' Best Unit competition started in 1969 and was extended to NS units in 1993 to recognise those that have displayed excellence in operations, combat readiness and administrations.

He decided against deferring his ICT last year even though his wife had just given birth to their first child.

The 30-year-old is a Forward Observer for the unit.

Balancing work and family is challenging for the Citibank relationship manager, but Lt (NS) Lee said he looks forward to reservist training with the committed group of people in his unit.

"You feel like you let them down if you don't put in your best effort," he said.

Mr Enrique Lee, 30, said commanders like Lt (NS) Cross and Lt (NS) Lee are understanding and work as a team, which motivates him to do his best.

The sales manager, an NSman who holds the rank of corporal first class, said: "All the experiences that helped me in my career actually came from when I was serving NS.

"I got to observe the different styles of leadership by different commanders."

"As a result, I know how my people at work want to be led," added Cpl (NS) Lee, who said two-way communication between leaders and workers is vital for a well-functioning team.