SINGAPORE - While there is plenty of focus on plastic waste, the more pressing issue facing Singapore is electronic waste, Environment and Water Resources Minister Masagos Zulkifli said on Thursday (Aug 2).

"E-waste is very toxic, people underestimate the toxicity of the e-waste that we dispose of and for the longest time we weren't processing it," he said.

Plastics on the other hand were being collected properly and then incinerated, the minister said.

"And we scrub all the toxic dioxins when we incinerate," he added.

Earlier this week, the Singapore Environment Council revealed that Singapore used at least 1.76 billion pieces of plastic a year, the majority of which is made up of bags from supermarkets.

Referring to this figure, Ms Goh said: "Singapore's recycling efforts have yielded very limited results. For example, only two per cent of the 820 million plastic bags taken yearly from supermarkets are recycled by consumers. How do we ensure that our efforts go a longer way?" 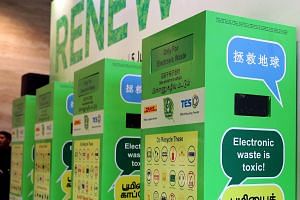 Time to pick up e-waste mess

Mr Masagos replied: "When you try to do everything you'll end up doing nothing, so do the most important things first - and right now we are tackling e-waste."

He talked about the extended producer responsibility law, due to take effect by 2021, that would force producers of electrical and electronic equipment in Singapore to ensure their products are collected and recycled or disposed of when they reach the end of their lifespans.

He also said that the authorities were focusing on tackling packaging waste. Last month he announced that companies in Singapore would have to report on the packaging used in their products in 2021, a year earlier than the previous deadline.

Mr Masagos said that the issue with plastic waste here was not about improper disposal, which affects the waterways and seas, but about reducing the demand.

He said imposing a levy and fine for using plastic bags was not the solution, calling instead for a revolution in how Singapore society addressed plastic waste with everyone working together instead of waiting for someone else to take action.

Mr Masagos also recalled that plastic bags solved a problem the Republic used to face in the 1970s.

"Back when we didn't bag our trash, we just threw food into our rubbish chutes and caused pests to come and at the same time it would corrode the linings of chutes, and we had to repair them so often. This problem got mitigated when we started bagging our trash."