Driving home his point at S'pore Lecture, he says Britain will pay a heavy price for Brexit

The British have already forecast their economic growth will nearly halve to 1.4 per cent next year, down from the 2.1 per cent growth predicted before Brexit in June. The sterling pound is also weaker.

Mr Rutte yesterday cited the consequences of Britain's retreat into itself to drive home his message that the best way to improve the lives of people fearful of open and free trade is for countries to stand together. He believes that staying open is the way to bring prosperity to people, because free trade creates more jobs and generates long- term economic growth.

THE SOLUTION FOR TOMORROW

The consensus behind free trade agreements is perhaps yesterday's reality. And uncertainty and resistance may be the situation of today... But the solution for tomorrow is definitely cooperation, cooperation, cooperation. We must not retreat into our own countries. Behind walls, barriers and words.

DUTCH PRIME MINISTER MARK RUTTE, who believes that staying open is the way to bring prosperity to people. 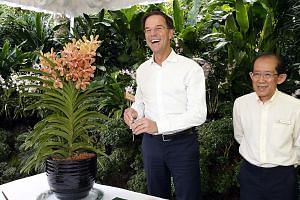 A personal aspect to Singapore and Dutch ties

"The consensus behind free trade agreements is perhaps yesterday's reality. And uncertainty and resistance may be the situation of today.

His words seem to resonate with the 550 diplomats, officials and students at his lecture on tackling anti-trade fears. They listened in rapt attention to his 20-minute speech in the Singapore Lecture series.

It led Deputy Prime Minister Tharman Shanmugaratnam, who introduced Mr Rutte, to declare at its close: "Thank you for the breath of optimism and energy."

The series is designed for world statesmen and leaders to present their insights on relevant issues of regional significance.

Mr Rutte is the third Dutch prime minister to speak in the series, reaffirming further the close ties between his country and Singapore. These ties date back to the 16th century when the Dutch arrived in South-east Asia, including Singapore, Prime Minister Lee Hsien Loong said earlier at a lunch he hosted for Mr Rutte.

The bond was further fortified when Dutch economist Albert Winsemius became chief economic adviser to the Government from 1961 to 1984. He was integral in developing Singapore's philosophy of being plugged into the global economy. Mr Lee and Mr Tharman underlined this common ethos of both countries.

Mr Lee said: "At a time when many countries are turning inwards and seeking to repudiate globalisation and shut out the world, we believe staying open and ahead of changes is the right strategy."

Mr Tharman said Singapore and the Netherlands are firm advocates of regional integration, and are deeply committed to open economies as the foundation for global prosperity and security.

"Trade is in our DNA," said Mr Rutte, adding that the countries' similarities and common global outlook are a solid foundation for cooperation in two areas: promoting free trade, and innovation.

He said: "We have to stand up for our shared values of free trade and openness. We have to form this united front, particularly today."

Singapore and the Netherlands can also show the world what can be achieved by working together to develop new solutions to global problems, such as rising sea levels.

This, said Mr Rutte, benefits people because knowledge and innovation are engines of future growth.

Both countries have a tradition of cooperation: For instance, the "polder" method of land reclamation that Singapore will use when it reclaims land off Pulau Tekong is an innovation from flood-prone Netherlands, and Singapore consulted closely with Dutch experts.

Mr Rutte said in closing: "We must...promote prosperity and quality of life, while staying mindful of the planet's limited resources and drawing on the spirit of cooperation."

Help those who've 'lost out' from globalisation