A popular tale by American author Mary Mapes Dodge tells of a Dutch boy who saves his country by putting his finger in the hole of a leaking dyke. The Dutch have had a long history with dykes - embankment barriers - given how the Netherlands is prone to flooding.

It may come as little surprise then that Singapore's latest land reclamation venture on Pulau Tekong, which will use a 10km-long dyke, is being done in consultation with Dutch experts.

To ensure that the project is cost- effective, safe and environmentally sensitive, Singapore is working closely with Professor Kees d'Angremond from the Netherlands, a longtime adviser to the Republic on reclamation. He is also an authority on polder development - the reclamation method that will be used to create 810ha of extra land on the offshore island.

This involves building a dyke around the area to be reclaimed and draining water from it. It will result in a low-lying tract of land, known as a polder, that is buffered from the sea by the dyke. Water levels in the polder are then controlled by a network of drains and pumps.

While polders may be new to Singapore, Prof d'Angremond said they have been built in the Netherlands for the past 2,000 years. These polders started out as primitive ones built by farmers who wanted to protect their land against flooding, and were often a matter of trial and error, he said. 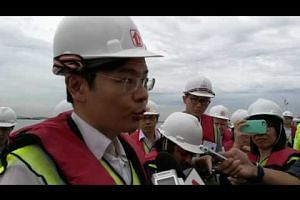 With modern technology today, safety of the polders is ensured using advanced methods. These include the building of strong dykes to ensure water does not flow in, determining the dyke's height in relation to expected sea levels and wave action, and having a grass cover on the inner dyke slope to ensure it does not erode, Prof d'Angremond said.

A stone revetment, similar to a sea wall, will protect the dyke from the sea waves, said the Housing Board, the reclamation project's appointed agent. Meanwhile, either a cement bentonite screen or a diaphragm wall will minimise the seepage of sea water through the dyke.

We will do a lot of research in polders together to see whether we can make further improvements that are really dedicated to the conditions in Singapore.

PROFESSOR KEES D'ANGREMOND, an expert adviser from the Netherlands.

The professor acknowledged that Singapore has "more severe" rain than the Netherlands, which might make draining water from the polder more challenging. But he said that this could be solved with a proper pumping system.

He added: "We will do a lot of research in polders together to see whether we can make further improvements that are really dedicated to the conditions in Singapore."