The durian season is expected to begin as early as next month. Durians from Malaysia are already trickling into Singapore, though the best ones are yet to arrive.

Durian sellers The New Paper spoke to predict the season will be in full swing only sometime in June.

Mr Ooi Meng Lee, 57, owner of 211 House of Durian, said: "The peak of the durian season this year will be in June. That is when the quality of the durians will be the best."

Echoing this assessment, the owner of Durian Culture, who wanted to be known only as Ms Lim, said the season is divided into three phases.

The first, the early harvest phase, is expected over much of the next two months.

Phase two may begin around mid-June and go on till August. 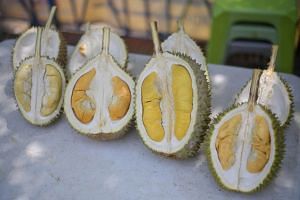 Durian season! 8 alternative ways to consume the king of fruits

My Turf: Balestier stall's one of the oldest durian sellers in Singapore

Durian dash: How investors are eyeing the world's most controversial fruit

Ms Lim, 40, added: "I would recommend that durian lovers buy from mid-June to August. The supply of durians is greater, which means consumers get to choose better quality."

After that comes phase three. Although durians will still be harvested, Ms Lim said they are likely to have been on the trees for a long time. The quality may no longer be so good.

Prices are naturally expected to fall with the increase in supply.

As for the types of the fruit entering the country, Mr Goh Kwee Leng, 67, owner of Durian Mpire by 717, said Singaporeans can expect to see a huge variety from Malaysia next month, including Mao Shan Wang, D13, D24 and XO durians.