SINGAPORE - Durex has issued a recall for three batches of its Real Feel condoms here, after these condoms failed to pass its shelf-life durability tests.

The recall was initiated last Wednesday (Aug 1), said Durex in a statement on its Singapore website.

"Our internal testing has shown that a limited number of non-latex Real Feel condoms may not meet the international ISO standard throughout their shelf life," said Durex.

"We apologise for the inconvenience this may cause you."

Durex said that there was no immediate safety concern for consumers and that those who used condoms from the affected batches have "no reason to be worried".

No other Durex products sold here are affected.

Customers can mail in condoms from the affected batches to Durex, with their full name, phone number, bank and bank account number. They will then receive the refund within two weeks.

Those who have used some condoms from an affected pack can also return the remainder of their unused condoms for a refund on the full pack. 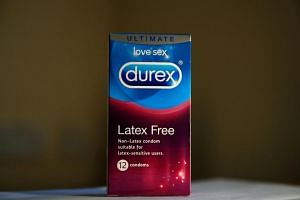 Durex to recall some condoms in Britain, Ireland over burst concerns

Affected customers are encouraged to message the Durex Singapore Facebook page or call the Durex consumer helpline on 1800-875-0770. More information is also available on the Durex webpage at http://www.durex.com.sg/product-recall/

Similar product recalls on the non-latex Real Feel line have also been reported in other places, including Malaysia, Australia, Spain, the United Kingdom and Ireland.

Condoms with the same batch numbers as the three affected ones here were recalled in Malaysia, in an announcement on Durex's Malaysia website last Wednesday.

Meanwhile, in the UK and Ireland, some Real Feel and Latex Free condoms were recalled last Monday after concerns that they may burst.

"Our tests have shown that some batches which are currently on the market in the UK and Ireland do not pass the requirements for burst pressure towards the end of the shelf life for the product," said Durex on its UK website.

"Only for the batches of condoms affected by this issue, there could be an increase in the number of condoms that burst during application or use."