As Singapore has its drug situation under control, "why should we go down the route of legalising drugs", asked Home Affairs Minister K. Shanmugam.

"If somebody can tell us and show us by evidence that legalising drugs is helpful for the person who is taking the drugs and generally doesn't impact society, then we can consider," he said.

He reaffirmed Singapore's zero-tolerance approach to drugs to The Sunday Times a week after he set out the country's anti-drugs stance at a special session of the United Nations General Assembly to tackle the world drug problem.

Held from April 19 to 21, the meeting saw several countries call for a move away from criminalising drug use, to instead focus on the health of drug users. Colombia, Bolivia, Uruguay, Mexico, Jamaica, New Zealand and Canada, for instance, argued for reforms such as regulated markets, especially for cannabis.

But in his speech to the assembly on April 20, Mr Shanmugam said: "For us, the choice is clear. We want a drug-free Singapore, not a drug-tolerant Singapore."

They (some countries) are seeing if a new norm can be established in the world, where countries will move towards legalisation. Our approach is to say each country should be free to choose the model that works for them. If you want to legalise, that shouldn't be forced on me.

MR SHANMUGAM, on some countries legalising drug use.

This is hogwash because this is the industry trying to present an acceptable reason for using cannabis... Look, if it's needed for medicinal purposes, let the medical bodies decide. We don't need human rights advocates advocating the use of cannabis."

On the growing acceptance of cannabis use in some countries.

You move him away from his contacts. You move him away from using drugs through a regime of supervision. You try and give him hope for his life through rehabilitation and economic opportunities. You try and work with his family to make sure there's family support. You rebuild a life by giving him the scaffolding. It's much tougher to do compared with feeding him with drugs, which is what (legalising drug use) means."

On how Singapore rehabilitates drug abusers.

He explained: "We are located in a difficult environment. We are near several major drug production centres. We believe that drugs will destroy our society.

"With 200 million people travelling through our borders every year, and given Singaporeans' purchasing power, a soft approach will mean our country will be washed over with drugs.

"This is why we have adopted a comprehensive, balanced, sustained and tough approach to tackling both drug supply and demand.

"The results speak for themselves. We are relatively drug-free, and the drug situation is under control. There are no drug havens, no no-go zones, no drug production centres, no needle exchange programmes. Our stance on drugs has allowed us to build a safe and secure Singapore for our people."

Last week, Mr Shanmugam expanded on this, and addressed the growing calls for countries to adopt "harm reduction" approaches, which are designed to minimise the harms associated with drug use.

But such measures will also impose social and financial costs on the state and taxpayers.

And this would be unacceptable to the majority of Singaporeans, said Mr Shanmugam, adding that "80 per cent of our local inmate population are either drug addicts or have drug antecedents. What does that tell you?"

He told The Sunday Times that several countries, including those in Europe and Latin America, were trying to make these liberal policies the new norm.

Much of the impetus for harm reduction was coming from countries which were "either major drug producers or have been affected by a large number of drugs flowing through their system", he explained. "It's come about because they're unable to cope with it any more. The traditional method of fighting the drug lords has not succeeded for whatever reason."

But Singapore is not in such a position and without its strict laws, the country would be swamped with drugs. He highlighted how the Republic is near the Golden Triangle of Myanmar, Laos and Thailand - the second largest heroin production centre in Asia.

Singapore's standing as an international hub means even drugs from Afghanistan - another major heroin producer - could end up here.

But "a lot of people know of our tough position. Given this knowledge, people are very, very cautious, and trafficking in Singapore becomes a very risky business". 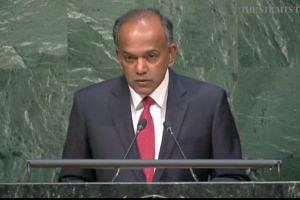 Singapore will not soften its stand on drugs, Shanmugam tells UN

Under the Misuse of Drugs Act, capital punishment is mandatory for trafficking certain drugs, for example, if a person is guilty of trafficking in more than 15g of heroin.

That is equivalent to 1,250 straws of heroin, sufficient to feed the addiction of about 180 abusers for a week.

Despite "a strong international movement to move away from the death penalty", Mr Shanmugam, who is also Law Minister, is adamant that it has proven to be effective in fighting the flow of drugs into Singapore.

The threat of such a sanction means "drug lords, the big drug gangsters don't come into Singapore". "The death penalty for traffickers, in our experience, has played a key role in combating drug trafficking. This is part of Singapore's framework of laws, coupled with effective enforcement based on rule of law."

One of the key drug threats facing the country now is the growing global acceptance of cannabis, which has been "glorified as a 'safe' drug", said Mr Shanmugam.

Latest statistics from the Central Narcotics Bureau show that it is now the second most-used drug by new abusers, after methamphetamine. More than two-thirds of new abusers were below 30.

Mr Shanmugam rubbished the claim that there was medical basis for using cannabis.

"This is hogwash because this is the (cannabis) industry trying to present an acceptable reason for using cannabis," he said, pointing out that it was often so-called "human rights" groups, instead of medical bodies, advocating the drug's use.

"The doctors have to say this is necessary. I haven't seen doctors saying that," said Mr Shanmugam.

Instead, the evidence is to the contrary. A study last year by the Institute of Mental Health found that cannabis abusers risked irreversible brain damage and psychiatric disorders. One in two of those who abuse cannabis daily will go on to develop an addiction.

But as cannabis culture was being promoted through foreign films, documentaries and even supported by celebrities, it made the situation "extremely challenging".

More young Singaporeans also travel abroad and may experiment with drugs overseas, before bringing their habits back home.

Fighting this requires strong education programmes. "We've got to explain to the young people what this is about... and by and large, it's been successful," he said.

Mr Shanmugam also stressed that Singapore takes a calibrated approach towards young abusers, a fact that is often overlooked.

If first- or second-time abusers get caught, they are kept out of the criminal system and given a chance to kick the habit.

"He is picked up, he is given counselling, he is given structured urine supervision, sometimes in halfway houses... We try and put him in a safer place, not detention necessarily," said Mr Shanmugam.

This focus on counselling and rehabilitation also means working with the abuser's family, educating him, and moving him away from his old contacts. Mr Shanmugam said: "You rebuild a life by giving him the scaffolding. It's much tougher to do compared with feeding him drugs, which is what (legalising drug use) means."

The easy way out would be setting up needle exchange centres and drug consumption rooms, where drug use is facilitated.

"But if you're an addict, how much of your potential, your soul, is being destroyed?" he asked.

Singapore's approach has allowed it to keep its recidivism rate low at around 30 per cent.

In contrast, some Western cities have a recidivism rate of between 40 and 50 per cent, he said.

He also highlighted how in the 1990s, over 6,000 drug abusers were arrested each year. Now, it is about 3,000 or so, despite the drug trade increasing around the world.

Mr Shanmugam admits that Singapore's smaller size, tough laws, adherence to the rule of law and no-nonsense approach to corruption mean it is easier to control the drug problem here.

It may be different for larger countries which might have difficulty policing their territories, a growing number of drug users, or a struggle with corruption and the power of drug lords. They might believe legalising some drug use to be the lesser of two evils, but doing so would still mean writing off the lives of a large number of addicts, he said.

This was why he was not keen for others to set a norm for Singapore. He said: "I don't have to choose between the lesser of two evils."

A version of this article appeared in the print edition of The Sunday Times on May 01, 2016, with the headline ''Drug situation is under control. Why should we legalise drugs?''. Subscribe
Topics:
More
Whatsapp Linkedin FB Messenger Telegram Reddit WeChat Pinterest Print Purchase Article Copy permalink