Under proposed changes to law, they would face shorter jail time, reintegrate sooner into society

Changes to the Misuse of Drugs Act (MDA) tabled in Parliament yesterday could see a distinction between abusers who do not commit other crimes and repeat drug offenders who resort to crimes to feed their dangerous habit.

Drug abusers who do not commit other crimes will be sentenced to the Drug Rehabilitation Centre (DRC), with shorter periods of incarceration and earlier integration into society compared with the current sentencing options.

Currently, drug abusers arrested for the first and second time undergo rehabilitation in the DRC. But those arrested for the third time or more face long-term imprisonment, or LT. LT1 and LT2 sentences carry heavier penalties, with jail terms starting at five years and a minimum of three strokes of the cane (for LT1).

"The enhanced rehabilitation regime, targeted at abusers who do not face other concurrent charges, will help them break the cycle of addiction more effectively and reintegrate into society sooner," said the Ministry of Home Affairs in a statement on the Bill tabled by Second Minister for Home Affairs Josephine Teo. "However, drug abusers who commit other criminal offences and harm society will continue to be dealt with very strictly. They will be charged in court and be liable for imprisonment and caning, including LT."

Changes to the LT regime were among a raft of amendments to the MDA, which was last amended in 2012. The others being proposed include new offences to criminalise "contamination acts" of actively introducing a drug trafficker to another person or teaching young people to consume drugs.

Introduced in 1998, the LT regime was designed to protect the public from hard-core abusers, and to punish and deter drug abusers from continued drug use.

In the proposed "calibrated approach", first-time abusers who pose a low risk of further abuse will be put on the Enhanced Direct Supervision Order, a non-custodial supervision order. They will be required to attend counselling, and a case manager will provide support to them and their families.

The enhanced rehabilitation regime, targeted at abusers who do not face other concurrent charges, will help them break the cycle of addiction more effectively and reintegrate into society sooner. However, drug abusers who commit other criminal offences and harm society will continue to be dealt with very strictly. They will be charged in court and be liable for imprisonment and caning, including LT (long-term imprisonment).

MINISTRY OF HOME AFFAIRS, in a statement on the Bill tabled by Second Minister for Home Affairs Josephine Teo.

First-time abusers who are assessed to be of moderate or high risk, and abusers who are arrested for the second time or more, will be put through the DRC regime where they will undergo various types of rehabilitation programmes.

The proposed changes will see the maximum period of detention in the DRC increase from the current three years to four years for high-risk repeat drug abusers.

Upon completion of the rehabilitation phase, they will be put on a community-based programme (CBP) at halfway houses, let out on day release from the DRC or be placed at home and monitored via electronic tagging. 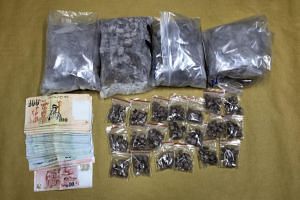 The move to separate drug abusers and focus on their rehabilitation was welcomed by in-care and after-care volunteer counsellor Tan Han Lay, 47, who visits Changi Prison weekly to counsel inmates.

"I have seen drug abuse inmates change to become hardened criminals when they mix with the wrong crowd in prison," said Mr Tan, who spent 28 years behind bars for a string of drug offences.

Abusers will be individually assessed and released from the DRC detention only when prisons staff find them to be ready.

After completing the CBP, abusers will be required to report regularly to the Central Narcotics Bureau for urine or hair testing.

Likewise, the maximum period of supervision will go up - from the current two years to five.

The authorities will work with community partners to provide training and job support, and counselling to ensure that abusers successfully reintegrate into society.

Fund for future rail lines to get initial $5b injection

Maids may turn to loan sharks if they need boss' nod

A version of this article appeared in the print edition of The Straits Times on November 20, 2018, with the headline 'Drug abusers who don't commit other crimes could be sent for rehab'. Subscribe
Topics:
More
Whatsapp Linkedin FB Messenger Telegram Reddit WeChat Pinterest Print Purchase Article Copy permalink