NTUC Enterprise's acquisition of Kopitiam part of social mission; transaction set to be completed by year-end

NTUC Enterprise is set to acquire home-grown brand Kopitiam as part of its social mission to ensure that cooked food remains affordable and accessible to Singaporeans.

The transaction - the value of which has not been disclosed - is expected to be completed by the end of this year, subject to regulatory approvals.

The acquisition will see NTUC Enterprise buying all of Kopitiam Investment and its subsidiaries.

They span 80 outlets comprising 56 foodcourts, 21 coffee shops and three hawker centres, as well as two central kitchens. Among them is the famous Lau Pa Sat Festival Market in Raffles Quay, which Kopitiam acquired in 1995.

Founded in 1988, Kopitiam is considered one of the largest players in the industry.

Market observers say its business could be worth a significant amount: The largest coffee shop operator in Singapore, Kimly, has a market value of over $300 million.

We will leverage our combined strengths to contribute to improving the vibrancy and resiliency of this daily essential sector in Singapore.

He said Kopitiam and NTUC Foodfare share the common objective of making quality cooked food affordable and accessible to all.

"We will leverage our combined strengths to contribute to improving the vibrancy and resiliency of this daily essential sector in Singapore," he added.

He said both Kopitiam and NTUC Enterprise are committed to protecting the interests of their customers and livelihood of stall tenants. "We are confident that NTUC Enterprise will bring Kopitiam to new heights in serving our community," Mr Lim said.

Upon completion of the acquisition, NTUC Foodfare and Kopitiam will continue to operate separately, with their management teams and employees remaining in place.

Customers, employees, stall tenants and other stakeholders can be assured that business will continue as usual, said the joint statement.

It added that both entities will seek synergies, including the use of technology.

Kopitiam said its popular prepaid stored-value cards for cashless dining, used by about 1.8 million cardholders across Singapore, can still be used at all its outlets. 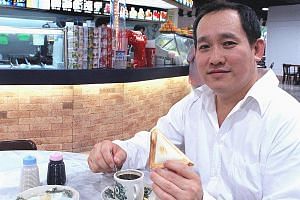 When asked if stall rentals would be affected, a Kopitiam spokesman said: "Separately from the acquisition, lease renewals and pricing are regularly reviewed as part of the ongoing business operations."

Currently, every stall at NTUC Foodfare coffee shops offers a budget meal starting from $2, while stalls at the three new hawker centres it manages have meals from $2.80.

The statement said NTUC Enterprise is "dedicated to helping Singaporeans stretch their dollar" and that, together, NTUC Foodfare and Kopitiam will "strengthen our ability to provide affordable cooked food, thereby carrying out our social mission of moderating the cost of living".

It added that NTUC Enterprise is exploring ways to extend some of its existing initiatives, such as increasing the number of Rice Garden stalls.

Other potential new initiatives include the extension of healthier food options, such as the distribution of diabetic-friendly meals.

When contacted, the BreadTalk group, which owns the Food Republic chain with 14 foodcourts here, based on its website, declined to comment.

Food Junction, which has a network of more than 16 foodcourts across Singapore and Malaysia, also declined to comment.

Koufu could not be reached for comment, and the Fei Siong Group, which owns more than 130 food outlets, also did not want to be interviewed.

Stallholder Ngoh Jook Guan, 55, who runs a porridge outlet at Our Tampines Hub Hawker Centre, which is managed by Kopitiam, said he welcomes the acquisition but is worried that operating cost might go up once the acquisition is completed.

Mr David Tan, 52, who operates eight coffee shops across Singapore, wondered if economies of scale could be achieved if NTUC Foodfare and Kopitiam are operated separately. 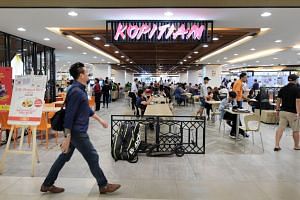 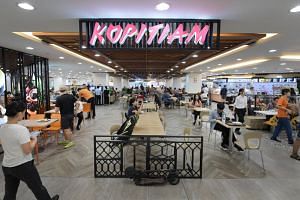 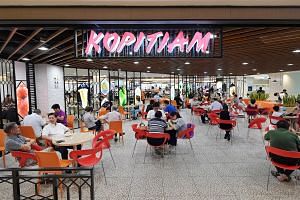 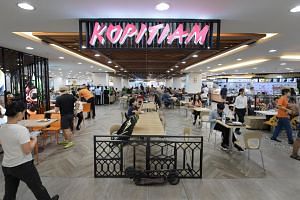