When 18-year-old American student Keziah Daum wore a cheongsam to her prom in Utah, she caused an uproar, with critics claiming she was misappropriating Chinese culture.

The Sunday Times has consulted experts from Singapore's different ethnic groups to find out when wearing an outfit from another culture is acceptable - and how to do it properly.

In their book Culture And Customs Of Singapore And Malaysia, Dr Jamie Koh and Dr Stephanie Ho say it is appropriate to wear apparel with bright and lucky colours - such as orange and red - or don the cheongsam or changshan (long shirt for men) during special festive occasions like Chinese New Year.

However, it is inappropriate to do so during grieving periods or funeral ceremonies, when dull colours like black and grey are more fitting.

The baju melayu is a shirt with a stiff collar and trousers worn by men, and the baju kurung is a loose blouse and skirt worn by women. Islamic tradition requires women to dress modestly and wear clothing that does not expose their bodies, apart from their hands and faces.

The baju kurung is a symbol of Malay heritage and is commonly worn from day to day and during festive or formal occasions. In Malaysia, the baju melayu is worn during official functions. 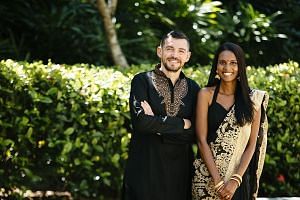 Non-Malays who don Malay apparel are seen as showing admiration for Malay culture.

Mr Hafiz Rashid, who has been a volunteer at the Malay Heritage Centre for three years, said: "The important thing when choosing to wear the traditional attire of a community is to do some research on the cultural symbolism behind it."

The dhoti, worn by men, is a loose cloth wrapped around the legs and knotted at the waist.

The sari is a long strip of cloth wrapped around a woman's waist and hung over the shoulder.

Southern Indians in Singapore might also wear a Punjabi suit - trousers accompanied by a long tunic - with intricate patterns.

Dr Laavanya Kathiravelu, a sociology professor at Nanyang Technological University, said that for non-Indians, "wearing such culturally specific clothing in a respectful manner that shows appreciation for the Indian culture is appropriate".

She added: "For example, in the case of non-Indians wearing saris to an Indian wedding or during Racial Harmony Day celebrations, it is not seen as a form of cultural appropriation but as a way of demonstrating admiration of another culture.

"It would be inappropriate to wear culturally specific clothing such as a sari or dhoti in a way that reinforces negative stereotypes of people of that culture.

"For example, wearing a dhoti to a costume party, where it is seen as an object of ridicule, is inappropriate and may cause offence to the community with which the clothing is associated."

A version of this article appeared in the print edition of The Sunday Times on May 13, 2018, with the headline 'Dos and don'ts of wearing traditional attire'. Subscribe
Topics:
More
Whatsapp Linkedin FB Messenger Telegram Reddit WeChat Pinterest Print Purchase Article Copy permalink