Dr Jaipal Singh Gill, executive director of the Society for the Prevention of Cruelty to Animals (SPCA), has a pet peeve. He dislikes being called an animal lover. "I feel it may create an 'us versus them' mentality," he said, as it introduces an element of conflict which cannot be good for animal welfare.

"What it does is it says, 'I'm an animal lover, you're not, so there are some differences between how we view things about animals and animal welfare,'" he explained.

"My challenge with the term is that when I tell people I work for the SPCA, a lot of them say, 'You must be an animal lover', or some will say, 'It's because you are an animal lover.'

"People who are termed 'non-animal lovers' may not want to join the advocacy; they may think why should they care. But I think, just like people, animal welfare should be everybody's concern."

After all, Mahatma Gandhi did say that the greatness of a nation and its moral progress can be judged by the way its animals are treated. This quote resonates strongly with Dr Gill. "I do believe that protecting animals is a duty that we all share," he said. "And that as we progress as a nation on multiple fronts, standards of animal welfare must be raised too.

"The state of animal welfare in Singapore has improved over the years and we must continue this important work."

But Dr Gill, who wanted to take care of animals ever since he was a child, is not resting on his laurels.

He is focused on what more needs to be done to reduce animal cruelty cases and improve their welfare, rather than keep count of how many animals he and his team have saved.

"I definitely remember some of the animals I've helped, but I spend more time thinking about the ones I haven't helped or was not able to. I wish I could have done more," said Dr Gill.

"If you think about the scale of animal suffering out there, it'll never be enough. I think of Singapore and beyond and then I think that the tiny numbers I have helped cannot stack up, so I would rather focus on the ones that have yet to be helped and think about what more can be done."

I do believe that protecting animals is a duty that we all share. And that as we progress as a nation on multiple fronts, standards of animal welfare must be raised too.

DR JAIPAL SINGH GILL, executive director of the Society for the Prevention of Cruelty to Animals.

The 37-year-old started his journey at the SPCA as an inspector investigating animal cruelty and complaints after he completed his life sciences degree at the National University of Singapore.

As an inspector, he saw animals in "extremely neglected states and then abandoned, terribly emaciated; some had skin or ear infections that went untreated".

"You could tell the animal had been in pain and suffering for a while and then just dumped."

The challenging part, he said, was not having evidence to prosecute the person responsible.

"Microchipping and the registration of dogs weren't as tight as they are now, so (in the past) you could find an animal but you couldn't trace it to the owner. Also, CCTV (closed-circuit television) cameras to capture evidence were not as widely in operation as they are now."

The frustrating thing was handling cases he could not do anything about because people were not breaking the law and refused to listen to him. "I remember this case… I went to a landed property. The dog was kept in a small cage. From the information we received, it was almost always kept in the cage and subjected to poor welfare," said Dr Gill.

"I remember the owner laughing when I turned up at the door because he was so surprised that someone dressed up in a shirt and pants with an official-looking pass came to his house to talk to him about his dog. He said, 'It's none of your business, I'll do what I want.'"

In worse cases, Dr Gill has had people threaten to call their lawyers or the police on him.

On his first day as an inspector at the SPCA, he also received a death threat via voicemail after investigating a complaint that a man was keeping many cats in his car.

"The problem of people mistreating animals is a complex issue," said Dr Gill. "We have seen some cases of animal cruelty committed by individuals with mental health disorder. It is very difficult to try to understand the mind of someone who has abused an animal."

Dr Sanveen Kang, principal clinical psychologist at Psych Connect, said that not everyone mistreats animals on purpose. A majority often do not understand the impact of their actions. "These people may be young and they hurt animals because they aren't thinking or because they can't stand up to their friends and peer pressure," she said.

"There are also those who might be mad at someone else, like their parents, and kick their pet dog because they can't kick their parents or they may think it's fun to watch an animal run away scared without really thinking about how the animal feels." 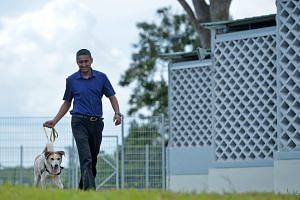 However, Dr Kang added that there are also those who intentionally hurt animals. "In this case, they enjoy hurting things or do it because it makes them feel powerful and they can use this to control others... They just choose to hurt animals because animals are more helpless than people."

Though the SPCA sees a good adoption rate, it has had animals adopted by people only to be returned to it. There are people who adopt on impulse, then put the animals up for adoption again after a year. Dr Gill noticed that many of these cases involve people who have adopted an animal without fully realising the care it will need.

"While the team at SPCA tries its best to inform them before and during the adoption process, this cannot compare with actually looking after an animal in their own home," said Dr Gill.

"We always stress that pets are for life and that one should not obtain a pet unless one can look after the animal till the end."

The SPCA does see returns but, thankfully, these are in the minority. It has many adopters going back to share their heart-warming journeys with their pets, sometimes years after the adoption.

"This fills us with hope for the many lovely animals in our shelter waiting for their turn," said Dr Gill.

• This article first appeared in tabla!