SINGAPORE - More than $100 million has been donated to charities and campaigns hosted on online donation portal Giving.sg, the platform said in a statement on Wednesday (Dec 27).

The milestone comes two years after the portal was created in December 2015 with a merging of SG Cares, a volunteering platform, and SG Gives, a donation platform.

It now is a three-in-one portal, combining donating, volunteering and fund-raising, with 127,000 registered users, 487 charities and 1,500 campaigns. People have also used the site to sign up for a total of 240,000 volunteering hours.

Giving.sg is managed by the National Volunteer & Philanthropy Centre (NVPC) and is backed by the Ministry of Culture, Community & Youth.

The portal allows users to donate to a variety of causes such as to children, the elderly, the disabled, animal welfare causes and even towards the environment.

There are specific causes within each category - for example, one can donate towards helping people with diabetes under the health category.

The portal also allows for fund-raising campaigns such as the dollar-for-dollar matching campaign by Agape Foundation, which raised $10,000 for Stroke Support Singapore, a non-profit organisation that helps stroke survivors recover.

The platform was revamped in October this year, with new features such as a wishlist for charities to specify items they need, and data analytics for users to track their own giving.

Organisations and group leaders can also create private volunteering opportunities and fund-raising campaigns for members to participate in.

Mr Andy Sim, NVPC's Director of Digital Innovation, said the team behind Giving.sg was very grateful for the support. 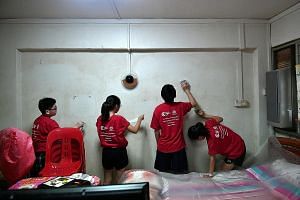 He said the $100 million milestone was an encouragement for them to continue improving the platform to help more charities meet their goals.

The figure was drawn from both the merged portal and the SG Gives and SG Cares websites.

"Despite weaker fund-raising sentiments reported by charities in Singapore, donations on Giving.sg increased more than 20 per cent this year," he said, attributing this to the increase in the number of active donors from January to November last year to the same period this year.