SINGAPORE - Forgotten reusable bags collecting dust around the home can now be put to good use and help save the earth.

From Wednesday (July 3), members of the public can drop their unused reusable bags into a donation bin at eight supermarket outlets - two each from FairPrice, Sheng Siong, Cold Storage and Prime Supermarket.

Local environmental group Zero Waste SG (ZWSG), which is behind the initiative, will then collect the bags and ensure they are in good condition before redistributing them to random shoppers at each of the selected outlets. This will happen every two to four weeks from now till October.

"Singapore has a 'use and throw' culture. We want to reduce the country's excessive usage of plastic bags and cultivate a habit of using reusable bags when shopping," said ZWSG manager Pek Hai Lin at the launch of the initiative, held at FairPrice Xtra Kallang Wave Mall on Wednesday.

Some 820 million plastic bags are taken from supermarkets here every year, a recent study by the Singapore Environment Council found.

Ms Pek said that most plastic bags do not get recycled, as it is not profitable for recycling plants. Instead they get incinerated, a process that increases carbon emissions and contributes to global warming.

When shoppers use a reusable bag for a year, it is estimated that they save 125 single-use plastic bags, according to study commissioned by the National Environment Agency.

"Though the initiative is a good step to encourage the use of reusable bags, this alone is not enough," said retiree Narayanan S.R, who was shopping at Kallang Wave Mall's FairPrice Xtra. 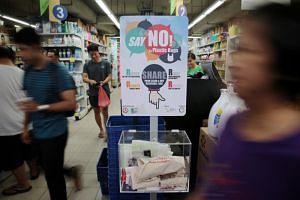 The Indian national said that he uses cloth bags made from coir, the fibre from coconut outer husks, to dispose of his garbage as an alternative to using plastic bags.

"It is the mindset of the population that they are entitled to using plastic bags which needs to be changed," said the 70-year old.

But fellow shopper Mr Yang, who declined to give his full name, thinks that the initiative will not be effective.

The 67-year-old retiree said: "Everyone already has a reusable bag somewhere at home, and will still need to use plastic bags eventually.

"I try to take at least 10 plastic bags when I go grocery shopping, because what else am I going to use to dispose of my garbage at home?"