In April, the property developer behind a Batam villa project splashed a series of print advertisements promising views of Marina Bay Sands (MBS) and leaping dolphins at the residents' doorsteps.

But now, Singapore's advertising watchdog, the Advertising Standards Authority of Singapore (Asas), has objected to the ads, and asked the developer to change them.

It found three things unacceptable: claiming that landmarks such as Marina Bay Sands are visible from the villas, promising a guaranteed rental of 7 per cent a year and quoting an anonymous buyer on how wonderful the development is.

The watchdog reviewed the ads after a Sunday Times report in May on the villas, which cost $758,000 each and are being built around a lagoon of captive dolphins.

It told The Straits Times that it had informed the developer about the objections last month.

Asas chairman Tan Sze Wee said that when an advertiser is informed that certain parts of an ad are not acceptable, the advertiser has to stop making the objectionable claims "with immediate effect in all current and future marketing communications".

The developers behind the dolphin lagoon villas are Singapore-registered firms Funtasy Island Development and Seven Seas FID. The project is located on a cluster of six small islands collectively known as Pulau Manis, 3km off Batam in Indonesia.

The 64 two-bedroom villas, which look like round bamboo huts and are each about the size of an HDB executive flat, are built around a lagoon with dolphins which residents can feed and play with. 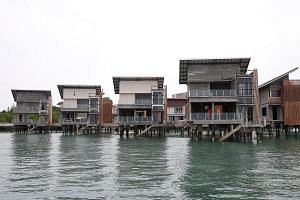 Villas being built near Batam in lagoon with dolphins, developer eyes Singapore buyers 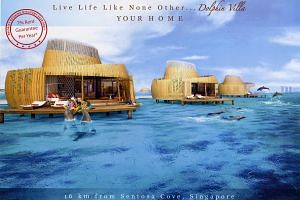 The developer has promised shops and restaurants nearby and a direct ferry service from Singapore's HarbourFront .

The villas, slated to be completed by the end of 2018, were launched at the upmarket One Degree 15 Marina on Sentosa in April.

The villas around the lagoon are part of a larger development of eight other housing projects on Pulau Manis with a total of more than 600 units - comprising villas, bungalows and apartments.

The development sits on land owned by PT Batam Island Marina. The Indonesian company has promised on its website to renew land leases up to 2112. Foreigners cannot own land in Indonesia but can be granted leases to use the land.

Ms Kelly Huang, a spokesman for Funtasy Island Development, said the developers "will observe the guidance" given by the advertising watchdog. "We will work closely with Asas in the future," she said.

"At this point, we have not decided the manner in which the ads will come out."

A check on Funtasy Island's website last week found that the Marina Bay Sands skyline, the 7 per cent annual rent guarantee and the ringing endorsement by the anonymous buyer - aspects that Asas objected to - were still prominently featured.

"Asas has jurisdiction only over local print and broadcast advertisements, but not what the companies do online," said Mr Ku Swee Yong, chief executive of estate agency Century 21.

"There is nothing stopping a developer from putting information on Facebook or the Internet.

"This is a key weakness."