SINGAPORE (THE NEW PAPER) - It was a route the couple had taken hundreds of times.

But early last Sunday (March 10), just 10 minutes into their ride, a taxi hit Dr Lynette Ngo from behind, shattering half her helmet and leaving her with devastating injuries.

Dr Ngo and her husband, Dr Hing Siong Chen, both 46, were riding their road bikes on Braddell Road when the accident happened.

The couple, who have two daughters aged 21 and 19, were heading to Upper Thomson Road to meet their cycling group for their weekly ride.

Dr Hing was cycling in front of his wife when he heard a crash.

"It took me by surprise because there were no warning signs like screeching or a loud honk. It was just a loud sudden bang," he told The New Paper on Thursday.

Choking back tears, the general practitioner recounted how he turned around to see Dr Ngo lying motionless on the road. 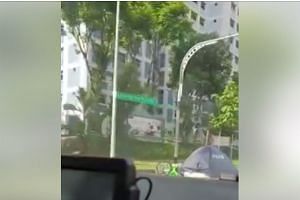 Cyclist, 17, taken to hospital after accident with stationary car

He said: "We have been cycling for so many years and we have had our fair share of falls, but we always got up.

"At first, the gravity of the situation didn't hit me because I thought she would stand up. But when I got closer and realised she wasn't moving, I panicked."

As he checked for his wife's vital signs, he saw a pool of blood starting to form around her head as blood trickled from her ear.

"It was very stressful and scary for me because I knew there was some form of internal head injury, and she could have died. I could have lost her... My world could have ended then."

The police said they were alerted at 6.02am to an accident involving a taxi and a bicycle in Braddell Road towards Lornie Road.

The taxi driver, a 57-year-old woman, was arrested for causing grievous hurt by a negligent act. Police investigations are ongoing.

Dr Ngo, who was taken to Tan Tock Seng Hospital in an ambulance, underwent a series of scans and was in a high dependency ward for two days.

Dr Hing, who is president of the Singapore Cycling Federation, said: "Just a few hours ago, we were doing our usual things and she was cycling with me, and now she was in the hospital.

"We had a big family dinner the day before and now everyone was here again, just for a different reason. I broke down."

Dr Ngo had a fractured skull and bleeding in her brain. She also suffered a broken collarbone, five broken ribs on her right side and a collapsed right lung.

But the couple are most worried by the nerve damage to Dr Ngo's right eye, which may be paralysed. The eyeball is now stuck towards the right corner of her eye and she is unable to move it, causing her to have double vision.

Dr Ngo also has partial hearing loss on her right ear as the ear canal was injured.

She was discharged on Wednesday night but will be going back next week to the hospital for surgery to fix her collarbone.

Dr Ngo, an oncologist at Raffles Hospital, said she cried when she first heard about her injuries.

It is unsure if Dr Ngo will be able to get back on her bike again, but the couple do not harbour any anger towards the driver.

Dr Ngo said: "I just hope that both motorists and cyclists on the road can take care of each other, because we share the road and we are equal users. Safe cycling is also important."

A member of their cycling group, Mr Lim Shien Tat, 46, saw the aftermath of the accident as he was cycling behind the couple.

Mr Lim, who had stopped to help direct traffic, said: "I have been cycling for quite a while so this is the third or fourth accident that I have witnessed.