They fare well in core skills against global peers, but MOE says bar higher in Singapore

Disadvantaged students in Singapore fare well by international standards, but when it comes to within the country, they find it harder to match up to the top performers.

A report by the Organisation for Economic Cooperation and Development (OECD) released yesterday found that Singapore ranks third in the world - behind Macau and Hong Kong - in terms of its share of students in the lowest socio-economic quarter who score well in science, maths and reading.

Some 43 per cent of 15-year-olds here from disadvantaged families showed that they had a good grasp of these core skills, compared with the OECD average of 25 per cent.

The 2015 Programme for International Student Assessment (Pisa) test had also found that about half of Singapore's disadvantaged students emerged among the international top quarter after accounting for socio-economic status, higher than the OECD average of about 30 per cent.

But when it comes to "national resilience", which looks at how these students fared against the top science performers in their own countries, only one in 10 of Singapore's disadvantaged students met the mark. This is lower than the proportion in 24 other education systems like Hong Kong and Finland.

The Ministry of Education (MOE) said that the OECD report shows disadvantaged students here do very well in absolute terms and relative to their peers from other countries.

But the bar they have to cross to be considered "nationally resilient" is much higher as top students here perform very well, it said.

For instance, only 10 per cent of students from lower-income families in Singapore obtained a score of at least 631 in the 2015 Pisa test for science.

A score of 631 is considered the 75th percentile mark for science for Singapore students. 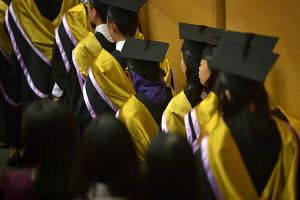 But in Finland, the bar was lower as its 75th percentile score was 599. As a result, 14 per cent of its lower-income students could hit this score or higher. In comparison, about 17 per cent of "disadvantaged students" in Singapore would reach a score of 599 and above.

Observers said that parental involvement plays a key role in contributing to the differences in students' performance.

Ms Denise Phua, who chairs the Government Parliamentary Committee for Education, said that while MOE has pumped in more resources for disadvantaged students and tried to improve social diversity in popular schools, the gap in achievement remains as "the aspiration and desire to be ahead of the race is relentless".

"As more parents move up the income ladder and perceive performing well in schools as a route to top schools and good jobs, the race to compete for popular schools gets more intense," she added.

Associate Professor Jason Tan of the National Institute of Education said: "It is a global phenomenon that when governments try to increase tertiary enrolment to satisfy demand, well-off parents strive even harder to ensure their children remain competitive in the system. It is then more difficult for children whose parents don't have the financial means or social networks to do as well."

Education and social mobility in Singapore