SINGAPORE - Works at Pedra Branca to improve existing facilities, provide berthing for vessels and additional logistics, administrative support and communications facilities on the island are expected to start by the end of this year.

It will also include land reclamation of about 7ha, the Government said on Monday (July 5).

The planned development is to enhance maritime safety and security and improve search and rescue capabilities in the area.

Land reclamation works will be carried out within 0.5 nautical miles of Pedra Branca and in Singapore territorial waters off the island. One nautical mile is about 1.85km.

"All works carried out will be in accordance with Singapore's domestic laws and international law," said a spokesman for the Ministry of National Development (MND), adding that they are expected to take several years to complete.

The island, located about 44km off mainland Singapore's eastern coast, now hosts amenities such as the Horsburgh Lighthouse, a helipad, desalination plant, facilities for a vessel traffic information system, as well as a communications tower and rebroadcast station.

Land reclamation works will be undertaken by the Housing and Development Board (HDB) - an agency under MND.

Said the spokesman: "Generally, the development works will afford us greater awareness over the waters around Pedra Branca and allow us to respond more quickly to maritime safety and security threats."

She added that Singapore had considered undertaking these development works as far back as the 1970s, but put those plans on hold due to the legal dispute between Singapore and Malaysia regarding the sovereignty over Pedra Branca, Middle Rocks and South Ledge.

In 2008, the International Court of Justice (ICJ) awarded sovereignty over Pedra Branca to Singapore.

"The ICJ in its judgment expressly noted that Singapore had plans for reclamation at Pedra Branca.

"With the discontinuance of Malaysia's application for revision and interpretation of the ICJ's judgment in 2018, Singapore will now proceed with these development works," said the spokesman.

On the impact of the reclamation works on marine life and birds, the ministry said consultancy DHI Water and Environment had conducted an environmental impact assessment.

"(DHI) had assessed that the development works will result in no significant impact to currents, sediment movement, water quality, navigation, human health and recreational activities," said the spokesman.

Corals located within the reclamation area will be permanently removed. But a similar habitat of a larger area will be re-created around the newly reclaimed land, to offset the loss of the original habitat, said MND.

This will be done creating a sloping perimeter bund around the new area.

The ministry said coral relocation works were also undertaken before the works began to move a representative number of corals, with a focus on rare and less common corals, from within the direct footprint of the project and within a buffer zone of 100m.

"Some of the harvested coral fragments from the project area will be grown in a nursery for transplantation onto the new perimeter bund when construction is completed," she added.

"This and additional ecological engineering measures, such as roughening of the surface of the concrete block structures, will enhance the natural recruitment of corals to the new perimeter bund."

Coral larvae are free-floating in the water column and rely on hard substrate to settle on, before they start growing their hard calcium carbonate skeletons of their own.

MND also said that the land reclamation will be done sensitively, taking into account the currents and tidal conditions, to ensure minimal sediment plumes are transported towards sensitive habitats.

A detailed environmental monitoring and management plan will be carried out throughout the construction period. 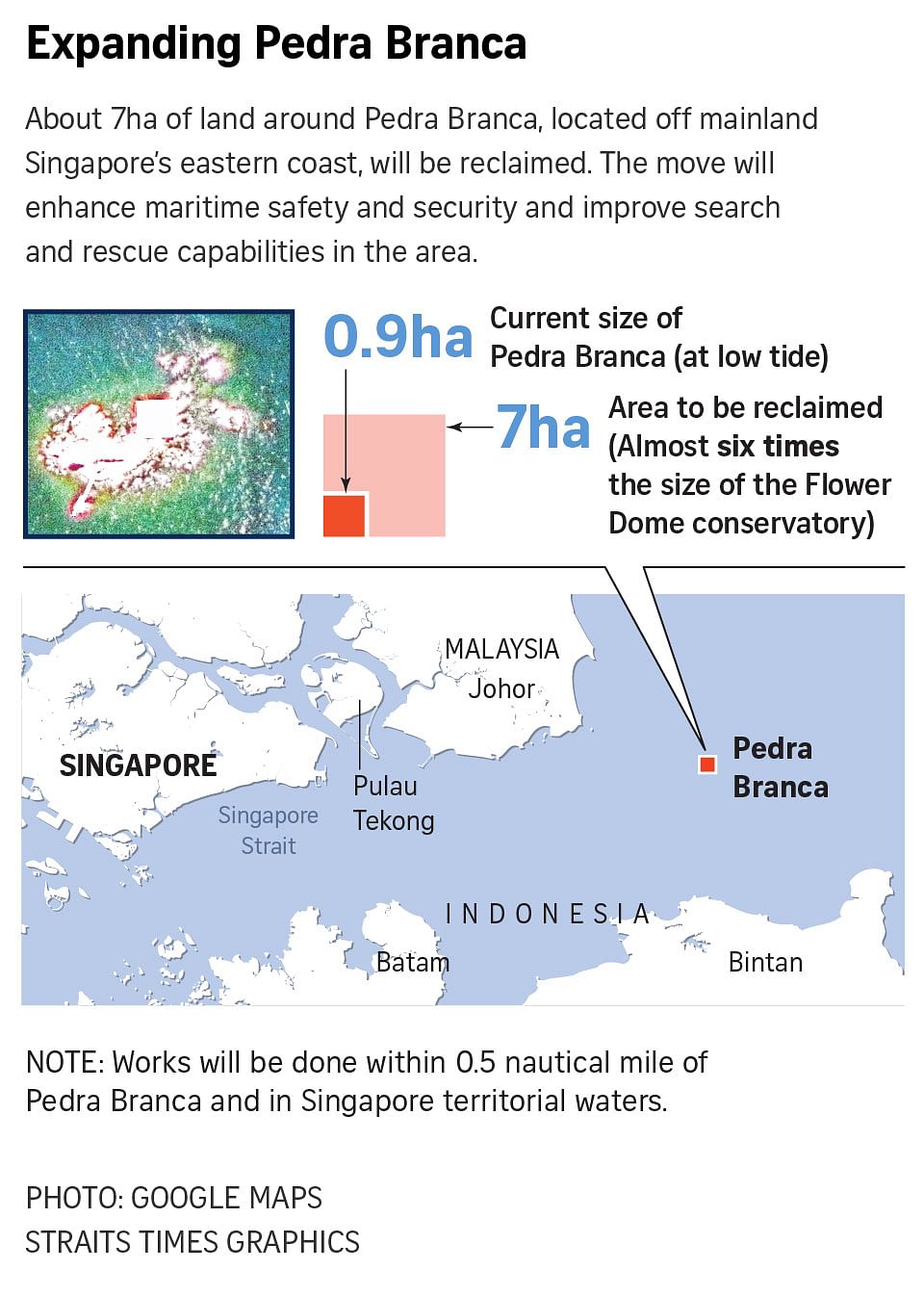 A contingency response plan will also be prepared and a response team will be set up in case environmental quality objectives are not complied with, the spokesman added.

The environmental impact assessment report, released on Monday, will be available for public viewing for four weeks.

Interested parties may make an appointment with HDB to view the report in person.

"The various technical and planning agencies will review the public feedback, as well as HDB's proposal for additional mitigation measures to address the feedback, if any.

"The (assessment) will then be updated and finalised, before HDB proceeds to seek approval from the relevant regulatory agencies for the proposed works," added the MND spokesman.

Mr Stephen Beng, who chairs the Friends of the Marine Park community, welcomed the efforts to relocate some of the coral.

He also suggested that parts of the seawall perimeter be naturalised. This will allow for the creation of seabird roosting spaces such as trees, while allowing for larger holes and ledges for turtles, he said.