SINGAPORE - Travellers on the North-South Line commuting to work after the Chinese New Year weekend, were met with a train delay on Monday (Feb 19) morning which lasted over an hour and a half.

The Straits Times understands that the delay was due to a similar reason behind a four-hour delay on the same line last week.

In a tweet at 8.29am on Monday, SMRT said that due to "track improvement work", commuters had to add 15 minutes of travelling time from Ang Mo Kio station to Raffles Place station, on the North-South Line.

The transport operator later decreased the additional travelling time to 10 minutes at 10.01am.

At 10.17am, the company tweeted that train services between the two stations were "running normally" again - over one and a half hours after the delay was first announced.

The North-South Line had also experienced delays for four hours last Wednesday morning (Feb 14) and it is understood the reason for that delay was similar to Monday's.

Back then, SMRT Trains chief maintenance officer Chia Chun Wah explained that the delay was due to trains running slower as part of the maintenance process. 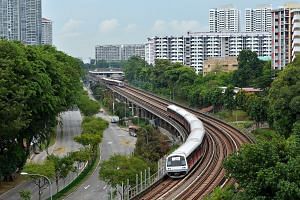 The company had to cast fresh concrete on a track bed supporting the running rails near Raffles Place station, to replace the worn parts of a concrete track slab.

It also imposed a speed restriction over a 300m stretch, with trains moving at 5kmh to 10kmh.

As a result, the trains bunched up along the line during peak periods. During off-peak hours, fewer trains were running, so the impact was less apparent.

Marketing strategy consultant Clement Law, 26, was travelling from Admiralty station to Newton station at about 8.30am to get to work, when he got caught in the delay.

He was aware of last week's incident, and had hoped that train services would have returned back to normal over the Chinese New Year weekend.

"Luckily, many people are still on leave from the Chinese New Year break, so the impact wasn't as bad it would have been otherwise," said Mr Law.