Corporal Kok Yuen Chin was one of the most well-liked officers during his stint at Tuas View Fire Station, where he served as a full-time national serviceman.

Nur Fatwa, who was then sentenced to one year and four weeks in jail, had also admitted telling another officer to delete video footage of the incident. He has been on home detention since last month.

"Everyone in the rota (rotation), we treat them as colleagues and we are bonded as friends," he told the court yesterday while testifying during the trial in which two commanders in charge of the station on the night of Cpl Kok's drowning are contesting charges against them.

The two officers - Kenneth Chong Chee Boon, 38, a lieutenant, and Nazhan Mohamed Nazi, 40, a first senior warrant officer - were commander and deputy commander, respectively, of the station that night. They had allegedly failed to prevent a group of servicemen from pressuring Cpl Kok to enter the pump well, thereby endangering his life.

Nur Fatwa said when he heard on the morning of May 13 that it was Cpl Kok's last day of duty before his operationally ready date, he joked with him, saying: "Today, kolam." 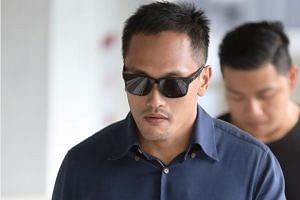 He remembered Cpl Kok smiling in response, but could not recall if he replied. He added that Cpl Kok made a speech then, saying that "he loves us and thank you for everything".

Nur Fatwa also said he has taken part in the kolam ritual twice. Almost 10 years ago, he had entered the pump well of another station voluntarily. The other time was when he and others threw another officer who was leaving Tuas View Fire Station into the station's well.

"Kolam means to celebrate an occasion, such as a departure," said Nur Fatwa. He had expected Cpl Kok to enter the well voluntarily, and would not have forced him into the well.

He associated the kolam ritual with celebrations because it had "been done for quite some time".