SINGAPORE - Some 10,000 DBS/POSB employees had their February salary specially credited into their bank account on Feb 4, in a surprise move by the bank on Thursday.

Known as Li Chun, the date marks the beginning of spring and it is believed to be an auspicious day on the Chinese calendar.

The practice of depositing money on Li Chun has caught on in recent years, as many believe that it can help their wealth grow and ensure good luck.

Long queues were seen at many banks and cash deposit machines across Singapore on Thursday.

"Over the last few years, we have credited salaries earlier during the Lunar New Year period to help our employees enjoy the festivities of the season even more," said DBS Bank Singapore Head of Human Resources Theresa Phua. 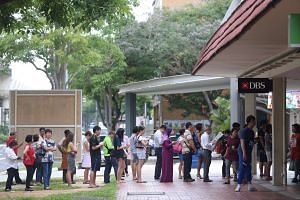 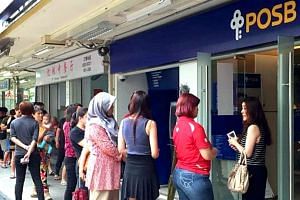 "This year, we have received feedback that the salary crediting on Li Chun has pleasantly surprised and delighted many employees," she added.

Other Chinese New Year celebrations for staff include distributing a pair of mandarin oranges to all employees and organising a bazaar with festive goods and gifts.

Last week, DBS announced that Singaporeans will be able to make electronic money deposits into their bank accounts instead of braving the long queues to deposit their cash. The bank hopes that this will provide greater convenience for those who wish to participate in the Li Chun practice.

Customers can do so from their DBS PayLah! mobile wallets, said a DBS Bank spokesman. They will also stand a chance to be one of 100 lucky winners to receive $88 in cash credit in a special lucky draw.

The bank's DBS PayLah! also has a special eAng Bao feature, which allows users from all Singapore banks to easily send and receive cash via their mobile phones. Users can also personalise their eAngBaos with photos, stickers and personal messages.