News that her eight-year-old daughter Christa had learning difficulties was devastating for mum Gloria Pereira, but after the initial shock she became determined to make the best of it.

The news initially stopped her in her tracks. She felt lost and alone, her hopes and dreams for Christa suddenly dashed.

But Ms Pereira, 46, soon realised that life goes on and there were still many options for her child, now 20, despite there being no cure.

Spurred by the therapies and interventions she read about while caring for Christa, she became a special needs educator and embarked on further studies at the Dyslexia Association of Singapore (DAS) Academy in 2014.

Ms Pereira graduated with a Master of Arts in Special Education Needs (SEN) last Wednesday, along with 66 other graduates from various DAS Academy programmes.

The private education institute has seen a steady rise in graduate numbers since it started in 2010, with about 10 more a year in the past few years, a trend that is expected to continue, said head June Siew.

"In the past, it was easy for parents or educators to dismiss students who are not performing as late bloomers, without questioning why," she added.

"Now with increased awareness of the presence of special education needs and the need for inclusivity, educators and parents are actively stepping in to understand why students are not performing, spurring some of them to take up further studies."

Ms Pereira hopes to use her degree to reach out to parents and educators and help those with special needs. 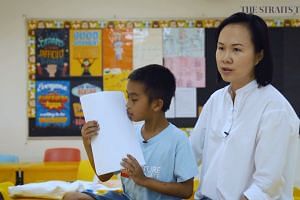 Enable us to help kids with special needs, say those with disabilities

She said: "I became an SEN educator when I saw the difference I could make in one life - my daughter's - and thought others out there could benefit. Now I have the qualifications to further back me up."

When Christa was growing up, she was unable to sit upright at six months and took a long time to start crawling and walking.

As she grew older, her social skills were poor and she had trouble making friends.

"I had to invite every child in class over for a play date to help her make friends. I could tell she badly wanted to form relationships, but it was not working," said Ms Pereira.

She believes that any child can learn. "It doesn't matter what their IQ level is or what learning difficulties they have. If the content is broken down into smaller pieces, and the pace is slower, they can still learn."

Christa is taking a Nitec course in Web applications at the Institute of Technical Education and is on track to complete the course in December - an achievement Ms Pereira, who also has a 17-year-old daughter in school, is proud of.

Fellow graduate Deborah Hewes, 57, took the course to prove to herself that she could do it.

While not officially diagnosed, she and her husband consider themselves dyslexic as they have the same symptoms as their three children, now 32, 30 and 25, who all have dyslexia.

The common struggles they face as dyslexics are in the areas of writing, spelling, speed of reading and organisational skills.

"For example, I have problems with the words 'where' and 'were'. If I don't concentrate, I will use the wrong word," said Mrs Hewes.

Her eldest child has half the reading speed of an average person, and has to allocate reading time in her timetable to ensure she gets it done. Her second child was the first of her children to be diagnosed with dyslexia, at the age of eight.

"I was trying to find out why she was struggling, and learning about the learning differences," said Mrs Hewes, who is the head of publicity and publications at DAS.

She feels strongly about support for those with special education needs. "The earlier you can help a child, the better it is for them. If they are struggling, do not just wait and see.

"Early intervention is the most important thing that a child with special education needs needs."