Church sacristan Robert Lim grew up hearing stories about his grandfather, stories that can now be shared with millions of other Singaporeans, thanks to modern technology.

These pioneering tales from Singapore's past have been collected in a new database to coincide with the nation's bicentenary.

That means Mr Lim, 71, will know that new generations will be able to appreciate the work people like his grandfather, Mr Lim Nee Soon, did for Singapore's development.

Mr Lim Nee Soon, who lived from 1879 to 1936, played a key role in developing rubber plantations in Nee Soon, now known as Yishun, and was a businessman and philanthropist.

He is one of the 200 prominent Chinese men and women whose stories are captured in the interactive website known as the Singapore Biographical Database of Chinese Personalities.

The database was compiled by the National Library Board, the Singapore Federation of Chinese Clan Associations and the National University of Singapore's (NUS) Department of Chinese Studies.

Our forefather was here at the time of Raffles but so much about him has been forgotten. It is urgent that we bring these things up now. The database is a baby step towards remembering.

NEUROLOGIST RAYMOND SEET, 43, a descendant - about seven generations on - of Mr See Hoot Kee, a Hokkien pioneer who lived from 1793 to 1847 and helped build some of the first Chinese temples in Singapore.

It was launched yesterday at the National Library and traces people who contributed to Singapore from the 19th century to the 21st century, including renowned figures like businessmen Eu Tong Sen and Chew Joo Chiat and war hero Lim Bo Seng.

Ms Gladys Low, senior manager of content and services for SingSEA and Exhibitions at the library, said: "Through this, we hope to inspire Singaporeans... It's about remembering where we came from."

The website features an interactive quiz with information on Chinese pioneers. The public and researchers can also share their knowledge of less well-known pioneers by filling in information gaps.

Take Mr See Hoot Kee, a Hokkien pioneer who lived from 1793 to 1847 and helped build some of the first Chinese temples in Singapore. 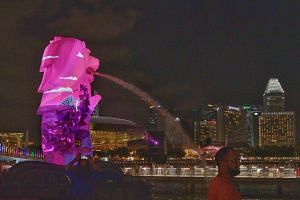 His descendant from about seven generations later, neurologist Raymond Seet, 43, said: "The story we often hear is about what the British did, but Singapore is also about the undercurrent of people here who made things possible and passed down this culture.

"Our forefather was here at the time of Raffles but so much about him has been forgotten. It is urgent that we bring these things up now. The database is a baby step towards remembering."

Ms Sim Ann, Senior Minister of State for Communications and Information, and Culture, Community and Youth, told the launch: "2019 marks an opportunity to look deeply at our history and reflect on how Singapore has evolved.I hope the database will inspire more Singaporeans to connect with, learn about and deepen their appreciation of the contributions of prominent Chinese personalities to Singapore."