SINGAPORE (THE NEW PAPER) - A Sunday morning (Feb 24) altercation in Eunos ended with a cyclist punching a lorry driver and cycling away.

The incident happened at around 10.20am. It was captured in a video that has gone viral.

Chinese evening newspaper Shin Min Daily News reported that the lorry had clipped the back wheel of the bicycle.

The video shows the cyclist carrying his bicycle and hitting the side of the lorry, which reverses and then makes a left turn.

The driver stops, gets out of his vehicle and runs towards the cyclist to confront him.

The cyclist suddenly punches him in the face, flooring him.

The cyclist then rides away.

It is understood that no police report was made.

This is the third recent incident involving a collision between a lorry and a two-wheeler that led to altercations. 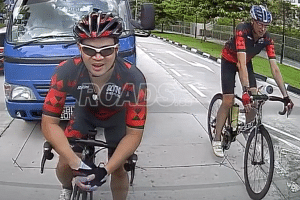 Home Front: Cranking up safety for cyclists on roads

In that incident, a lorry driver has been charged with negligently failing to keep a proper lookout while overtaking a cyclist, thus colliding with him.

The cyclist has also been charged with causing mischief by knocking off the side mirror of the lorry.

In the second incident, which occurred on Dec 31 near Roxy Square in Katong, a motorcyclist honked and overtook a lorry driver, who he felt was driving too slowly.

He allegedly blocked and challenged the driver to get out of the vehicle. When the driver refused to do so, the motorcyclist opened the vehicle's door and tried to pull him out.

A video of the incident shows the motorcyclist kicking the door of the lorry before breaking its side mirror.

Both these cases are scheduled to be heard in court on March 12.