Fibre broadband was disrupted in the eastern part of Singapore yesterday, affecting about 10,000 customers and some might get their services back only today.

NLT said it first received reports of a fibre service interruption at around 2.50pm yesterday. The outage affected users of all three major telcos and Internet service provider MyRepublic.

NLT said the interruption was caused by a third-party contractor who cut a number of fibre cables while performing construction work along Tampines Avenue 9.

The network builder has deployed its recovery team and is working with the relevant parties to restore services to all affected regions, which include areas around Pasir Ris, Tampines, Changi and Loyang.

Earlier yesterday, Singtel, StarHub, M1 and MyRepublic posted on their Facebook pages that users in some areas like Tampines and Pasir Ris might experience difficulties accessing fibre services, including Wi-Fi, television and phone services.

Singtel also said some of its Wi-Fi hotspots on the island were affected, but these services were later fully restored. But fibre broadband, fixed voice and Singtel TV services in the north-eastern part of Singapore remained affected. 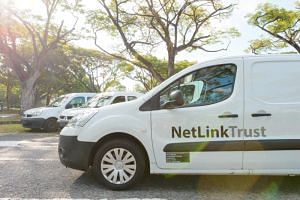 Some netizens said areas like Punggol and Sengkang were also affected by the fibre broadband downtime.

Housewife Kendra Koh, 26, a StarHub customer who lives in Pasir Ris, said she had to buy unlimited mobile data for one day from another mobile service provider for one of her two cellphones so that she could connect her Internet TV set to the phone's wireless hotspot.

"This is not the first time that this has happened. It has happened at least a couple of times recently and it's quite ridiculous," said Ms Koh.

Telco regulator Infocomm Media Development Authority (IMDA) said it is aware that a cable-cut incident resulted in the service disruption to fixed-line telecom services to users in some eastern parts of Singapore such as Tampines.

"IMDA is investigating the incident and has asked affected service providers to restore services expeditiously," a spokesman said.

StarHub said that as a gesture of goodwill and appreciation, it will offer affected fibre customers a $10 rebate on their December bill.

Both Singtel and M1 said they will waive local mobile data charges for affected customers.

At 7.15am on Thursday morning, M1 said in a statement on its Facebook page that about half of its affected customers had their services restored.

As of 9.49am, Singtel said that progressive restoration of the affected broadband services was at 80 per cent. It also added that all fixed voice services had been restored by 2am.

StarHub said at 10.50am that NetLink Trust had restored approximately 80 per cent of the affected underground fibre cables serving its customers.