KIEL, GERMANY - Starting on a clean slate has allowed Singapore to customise the new Type 218SG submarines more extensively, compared to what it could do with second-hand submarines.

Some of the customisations include using materials that are more suited to the saltier Singapore waters, having more automation that affords crew members more rest, and also incorporating design elements that are tailored to the average Singaporean sailor's body size and strength.

Mr Ong Li Koon, director of naval systems at the Defence Science and Technology Agency (DSTA), revealed these features when he spoke to reporters on Monday (Feb 18) before the launch ceremony of a new Type 218SG submarine in the port city of Kiel, Germany.

At the event, Defence Minister Ng Eng Hen's wife, Professor Ivy Ng, launched Invincible, which is the first of four Type 218SG submarines purchased by Singapore to be delivered from 2021.

Mr Ong, 43, said the experience with the Republic of Singapore Navy's (RSN's) latest submarines - known as the Invincible-class - contrasted markedly with its four existing Swedish submarines.

Between 1995 and 1997, the RSN acquired four Sjoormen-class submarines from Sweden which were built in the 1960s. In 2005, Singapore bought and upgraded a pair of Swedish Vastergotland-class submarines, which are called Archer-class vessels.

"In the case of the Swedish submarines, it was more like taking an existing submarine and trying to customise it to our needs, so we couldn't change much because there was a limit for the existing boats."

"Now, we have a clean sheet, we take an existing design but customise it. We can do a lot more if we want," said Mr Ong, who was director for the Type 218SG submarine programme before taking up his current appointment last September.

Defence Minister Ng Eng Hen at the launch of Invincible

DSTA, RSN and German defence contractor thyssenkrupp Marine Systems (TKMS) worked together on the design and development of the Type 218SG.

On making sure the new ship is suited for tropical waters, Mr Ong said the components chosen such as pipes have to be able to handle the more corrosive and salty water, as compared to freshwater in the Baltic Sea. 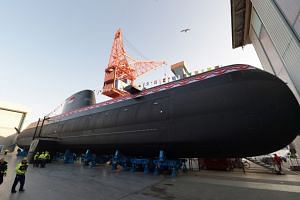 Invincible, first of Singapore's biggest and most advanced submarines, launches in Germany

A rare look at RSN submarine training: Crew can now take out adversary within minutes

Another improvement was in the area of ergonomics. Mr Ong said that the height of an average Singaporean crew ranges from 160cm to 185cm, compared to the Germans, which starts at 170cm.

"So we place all the equipment properly so that the crew can reach everything they need to operate. We also calculate the strength required for certain operations, as our Asian physiques are not as strong as the Germans," he said.

Before the launch ceremony, DSTA and TKMS, the manufacturer of the Type 218SG submarines, signed an agreement to collaborate on new technologies such as additive manufacturing and data analytics for naval applications.

The memorandum of understanding allows both parties to work together on the design, engineering, and qualification of additive manufactured components, such as submarine spare parts, which could be tested and trialled on Singapore submarines.

Military Expert 3 Simon Oh, who is Coxswain of Invincible, the first Type 218SG submarine, said the RSN's current fleet require watch keepers in three different locations - for the combat, engineering and weapon functions. A coxswain is the most experienced sailor on a ship, responsible for discipline and welfare.

"With this new boat, we are able to co-locate them. This will facilitate better communication and faster decision-making," he added.

There will also be larger living quarters for the crew, more cubicles for showering, and more storage spaces for the chef to better plan his menu, said ME3 Oh, 42.

"Having more menu options might also translate to better morale for our crew."