SINGAPORE - The current system of multilateralism has its flaws but it should not be jettisoned or broken because the alternatives would be much worse, Defence Minister Ng Eng Hen said on Wednesday (Oct 30).

This was one of the challenges facing senior military leaders and they must do their part to build confidence through defence diplomacy, he said.

Dr Ng was speaking at a Goh Keng Swee Command and Staff College graduation ceremony that was held at the Istana.

Dr Ng said another challenge was dealing with the impact of disruptive technologies.

Advances in machine learning, artificial intelligence, increasing automation, exploitation of cyber and outer space and hypersonic weaponry would bring about a revolution in military affairs, he said.

"It will impact vocations, units, and even entire formations. Modern militaries will have to restructure to remain relevant, let alone effective."

"This will be another big challenge as you lead your units through these changes," he said.

The graduation ceremony marked the completion of the 50th Command and Staff Course, which prepares officers for senior appointments in the Singapore Armed Forces (SAF).

It is the highest level of formal military education offered in Singapore for regular, national service and international officers.

This year's course included the biggest batch of international officers attending. There were 23 officers from 15 countries, including Australia, Bangladesh, China, South Korea and, for the first time, Jordan. 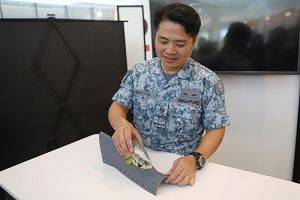 Dr Ng said that their attendance was not only an endorsement of the stature of the college, but also a reflection of the close ties that Singapore had built and shared with many countries.

Besides their international counterparts, the graduates consisted of 114 SAF regular officers, 46 national service officers, 37 military experts, and one warrant officer, as well as a Singapore Police Force (SPF) officer.

One of the graduates, Major Ong Chin Shi, 34, an army signals officer, said the value of having international officers attend the course was that it allowed for mutual learning of perspectives. She was paired with a US intelligence officer for the 10-month course.

"It gave us a chance to share Singapore's perspective, such as on our national or defence policies. In turn, we can also understand their perspective on how they view certain issues or Singapore," she said.

In his speech, Dr Ng also said that the rise of trade wars concerned him as trade was usually the last sector to be affected when relations between countries deteriorate.

"Not only because it affects the real economies, jobs and livelihoods, but more importantly because the necessary preconditions for peace are weakened."

Trade frictions had increased substantially and become commonplace over the past decade, even between countries which were strong, traditional allies, like the US and the European Union, he noted.

"For small countries like Singapore, who are 'price-takers' in geopolitics, we watch the turn of global events with increasing alarm and consternation," he said, while pointing out that the strategic rivalry between the US and China had sharpened and the common ground on which countries could work together had shrunk.

Dr Ng said that if there was ever a time for strong leadership, it would be now with the potential unravelling of the institutions and mechanisms which promoted and buttressed the 70 years of relative peace since World War II.