A campaign to help a baby born without part of her oesophagus to get specialist surgery in the United States has raised $1.2 million. Another to get money for surgery for a maid's young son afflicted by bone cancer has pulled in nearly $63,000.

Less than two weeks ago, a 46- year-old woman with a four-year- old son asked for help to support them financially as she battles ovarian cancer. Since then, she has raised nearly US$40,000 (S$ 54,000).

A campaign to raise money for the families of two SMRT trainees who died after being struck by a train last month has amassed $46,975.

The act of appealing to the kindness of strangers online has been catching on in Singapore, as more turn to sites such as Giveasia and Indiegogo - two of the more popular sites - to raise money for anything from medical treatment, education and even to fix a home razed by fire. 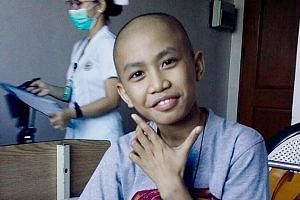 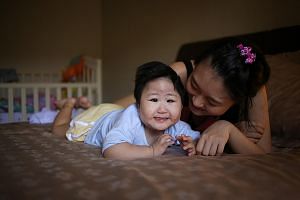 Giveasia, set up by National University of Singapore students in January 2010, has helped 50,000 people here and in Asia raise more than $9.25 million since going online.

Indiegogo has facilitated US$240 million in donations for social campaigns globally. Its social fund-raising arm, Generosity, which was set up last October, now hosts nearly 100 campaigns from Singapore.

Charities too have hopped on such platforms, which offer an easy way to extend their presence online.

TTSH Community Fund, the charity arm of Tan Tock Seng Hospital, uses it as an extra platform to reach out to donors for funds to help needy patients with their bills.

TTSH Community Fund executive Deborah Wong said it decided to get on board the Giveasia platform as it offers donors an easy way to give - by using their credit cards - and also draws more eyeballs to its cause.

Those who go to these crowdsourcing platforms to raise money instead of going to a charity say crowdfunding brings in more funds.

There is also less red tape. Anyone above the age of 13 - with supervision requirements in Indiegogo's case - can create a campaign. But the websites can shut down campaigns that violate guidelines, such as those involving illegal activities.

Giveasia charges a 2 per cent bank fee to process credit or debit card transactions. Generosity charges 3 per cent and 30 US cents on each donation to manage the fund transfer.

For 38-year-old corporate lawyer Isabelle Claisse, who launched a Generosity campaign to help her maid's 11-year-old son, who had bone cancer and needed surgery, this meant an easier time collecting funds. "I didn't have to get people to send cheques or cash," said the Briton.

Instead, the platform transferred the money to her personal bank account. "I then transfer that money to the hospital," said Ms Claisse, who has been posting updates on how the money has been used.

Such accountability is critical for a successful campaign, and also helps the public feel more connected to the campaign.

Charity rules here require fund- raisers to keep a record of what has been received and how it is disbursed. And the Office of the Commissioner of Charities advises donors to be cautious and give to individuals or organisations they know.

A spokesman for Generosity told The Sunday Times what makes a successful campaign. "It's important to start with a personal story, tell the world who you are so they can feel connected. Explain why you care about what you're doing. Focus on the resources you need, and what your impact will be.

"Transparency will build trust with your contributors."

A version of this article appeared in the print edition of The Sunday Times on April 10, 2016, with the headline 'Donors clicking with a cause - and giving'. Subscribe
Topics:
More
Whatsapp Linkedin FB Messenger Telegram Reddit WeChat Pinterest Print Purchase Article Copy permalink