Experts explain how injured reptile may have got here, suggest possible relocation homes

The crocodile found in a Sungei Kadut drain last month may have been fleeing a territorial fight or was relocating from Malaysia, wildlife experts told The Straits Times.

The 3.4m estuarine crocodile - one of the largest ever spotted in Singapore - was caught and transferred to a crocodile farm on June 21 by the National Parks Board (NParks) and trained contractors.

It was believed to have entered the Sungei Pang Sua drainage area.

Wildlife experts believe it may have been a lost immigrant from Malaysia, where development works are destroying saltwater crocodiles' habitats.

They believe the reptile could have strayed from the Strait of Johor or Singapore's north-west coastline, such as the Kranji Mudflats or Sungei Buloh Wetland Reserve.

In a Forum letter to The Straits Times yesterday, NParks' director of wildlife management said that since the crocodile had a severe injury on its left hind foot, it was sent to the farm where it has a higher chance of survival than in the wild.

The Animal Concerns Research and Education Society (Acres) deputy chief executive Kalai Vanan said the crocodile may have sustained the injuries in a fight with another crocodile. Saltwater crocodiles tend to be territorial.

"It would have swum through the drainage system possibly flooded by rainwater before getting stuck in the Sungei Kadut drain," he said. 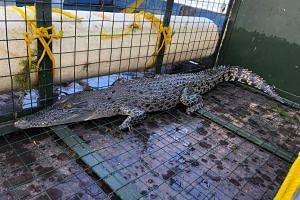 Fear and fascination: 200 years of the crocodile in Singapore

Malaysia coastal works may be why croc sightings here are rising: Experts

Wildlife consultant Subaraj Rajathurai said: "The crocodile may have been looking for a new habitat or a new foraging area. This guy just chose a wrong place to stray into."

National water agency PUB told The Straits Times its officers have not seen any crocodiles in the surrounding drains in Sungei Kadut following the June 21 sighting.

Estuarine crocodiles, also known as saltwater crocodiles, are the only species found in Singapore. They live on the north-west coast, where mangroves and estuaries are rife.

They are considered critically endangered here. In 1996, the species was declared extinct in Singapore by the International Union for Conservation of Nature, but it seems to have made a comeback. At least 20 estuarine crocodiles call Singapore home today.

Mr Subaraj said saltwater crocodiles - one of the largest species in the world - can grow to over 5m long, but are unlikely to do so here as their habitats are small.

Mr Kalai said Acres hopes the 3.4m crocodile will be released into the wild after it has recovered. Acres hopes to work with NParks to explore places where rescued reptiles can be returned to the wild.

Mr Kalai and Mr Subaraj said the reservoirs in the western region of Singapore can be explored as possible homes for crocodiles as the catchments are stocked with fish they can eat. The Western Water Catchment area, comprising Tengeh, Poyan, Murai and Sarimbun reservoirs, is used for military training and is restricted to the public.

"(Allowing crocodiles to be housed here) can be explored as a multi-agency effort between Acres, Mindef, Singapore Land Authority and PUB," said Mr Kalai.

A tailless crocodile was seen in a scuffle with six otters in the waters of the Sungei Buloh Wetland Reserve.

A 2m-long crocodile was found lazing on a pedestrian pathway in Sungei Buloh Wetland Reserve.

A crocodile was spotted at a construction site in East Coast Park, prompting the National Sailing Centre to suspend all water activities for a few days.

Two sightings of a crocodile swimming in the waters along Changi Beach Park were reported. A 2m-long crocodile was also spotted sunbathing on a mudflat of Sungei Tampines in Pasir Ris Park.

A version of this article appeared in the print edition of The Straits Times on July 06, 2019, with the headline 'Croc concerns: Past and future'. Subscribe
Topics:
More
Whatsapp Linkedin FB Messenger Telegram Reddit WeChat Pinterest Print Purchase Article Copy permalink