SINGAPORE - In the course of history, many nations fell apart because their people no longer felt they belonged to a collective whole. This makes forging a sense of unity among Singaporeans a critical task, Deputy Prime Minister Heng Swee Keat said on Monday (Sept 30) evening.

"The sense of unity in our nation is critical - the feeling that you and I are Singaporeans and we want to make Singapore work," Mr Heng said. "How do we maintain that? That is the critical question."

He was replying to Professor Chan Heng Chee, who pointed out at a dialogue that Singapore's fortunes have waxed and waned over the centuries.

"Do you see a time to come when Singapore would be marginalised again, and that we would lose our position? And what should we do about that?" asked Prof Chan, who is Ambassador-at-large with the Ministry of Foreign Affairs.

Prof Chan, who is also chairman of the Lee Kuan Yew Centre for Innovative Cities at the Singapore University of Technology and Design, was moderating a dialogue with Mr Heng at the two-day Singapore Bicentennial Conference, organised by the Institute of Policy Studies.

The conference, which ends on Tuesday, aims to examine Singapore's history from before Sir Stamford Raffles arrived in 1819, as well as how the country's past can inform its position in the modern world.

Mr Heng, who is also Finance Minister, stressed the importance of partnership, both among Singaporeans and the wider global community.

"If we lose a sense of togetherness, whether among our people or around the world, we are in for a bad time," he said. "But if we have that sense of purpose, that sense of community, then I think we can tackle the many challenges ahead."

Responding to Prof Chan's question, Mr Heng pointed out that climate change and pandemics could also have a significant impact on Singapore's future. 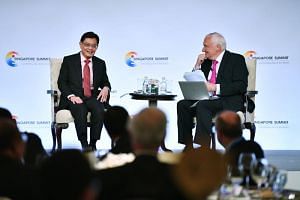 Singapore can turn its racial and religious diversity into a strength globally: DPM Heng Swee Keat

Another critical challenge for the country is how it can remain useful and relevant to the wider world, he added. "If Singapore cannot make a contribution to the world, if we are no longer relevant, then nobody will be interested in our survival or success."

Mr Heng also fielded questions from the audience, who asked him about issues such as inequality, xenophobia, trade tensions between China and the United States, and how Singapore will fare with growing competition from its regional neighbours.

An audience member who identified himself as a student from the Singapore Institute of Technology asked about the role or stance Singapore should have in the ongoing US-China trade war.

Mr Heng said ongoing tensions between the two countries has gone beyond one on trade deficit and surplus, to a technology war, to a longer term competition on values and systems of governance.

"What can Singapore do? We can only work together with like-minded countries, I think there are many interesting countries in the world who share our view. We hope that we can be a voice of reason," he said.

The Singapore Bicentennial's principle is that of a nation-state at heart, which "by definition" is something separate from the rest of the world, he said.

But Mr Heng, he noted, had previously talked about creating a global environment in which small and large states could effectively interact.

Mr Heng replied that there was no contradiction between being a nation-state and being a member of the global community.

Using an analogy of competing firms, he noted that there are nevertheless areas of common interest where all companies should work together, and yet each company has unique characteristics that add value for their customers.

"In the same way… it would be wrong for us to think that every nation must be like every other nation," he said, adding that diversity of nations is a good thing and each nation's unique culture, heritage should be respected.

He added: "Even as we compete economically and in various fields... push ourselves towards excellence, and be the best that we can be, but at the same time we also cooperate to maintain peace and stability around the world."