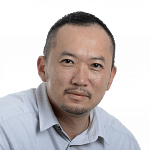 Author and cartoonist Otto Fong did not join the thousands of Singaporeans standing in line for hours to pay their last respects to Singapore founding Prime Minister Lee Kuan Yew.

"When I was a kid, my dad was banned from entering Singapore. I had to live in Malaysia and study in Singapore so I stood in line at the Customs for 10 years, back and forth daily," he wrote in a Facebook post last week.

Among the many stories of how Singaporeans' lives changed for the better as a result of Mr Lee's political decisions, the 46-year-old's stands in stark contrast.

His father is Mr Fong Swee Suan, a former union leader who became a key member of the People's Action Party, but left the party in 1961 over differences in opinion about Singapore's merger with Malaya, Sabah and Sarawak. He was subsequently branded a communist and arrested in 1963 as part of Operation Cold Store, an anti-communist sting.

The 1955 Hock Lee Bus riots were also allegedly instigated by his father, together with fellow left-wing unionist Lim Chin Siong, although the older Mr Fong has repeatedly denied this.

After his arrest, Mr Fong's father was placed under detention across the Causeway in Muar and banned from entering Singapore.

"It was difficult because the family didn't have much savings, so my mum had to work in a stationery shop and take care of my very young sister, while still finding ways to go visit my dad in Muar," said Mr Fong.

He was born a year after his father was released in 1967. He said the family wanted to stay in Johor Baru because his parents still wanted their children to be educated in Singapore, but the older Mr Fong could not find a job there initially because of his reputation.

That reputation also resulted in the family being shunned by everyone here. Mr Fong said that when he was growing up, he did not go to any Chinese New Year or extended-family gathering.

"There was never any active harassment, only this fear in everyone's mind that I don't want to be seen with this person."

The isolation spilled over into Mr Fong's social life as a student in Singapore.

"Your friends would ask you to watch a movie and you have to say you can't because you have to catch the bus home to JB," he said.

Mr Fong remembers that big moment of realisation when he saw a political cartoon by Singaporean artist Morgan Chua depicting his father and Mr Lim as crazed "brothers-in-lawlessness".

"It was like that moment in Star Wars movie The Empire Strikes Back when Luke discovers that Darth Vader is his father," said Mr Fong. "It created a lot of confusion and I blamed my dad for wasting his time in politics."

The ban on his father entering Singapore was eventually lifted in 1990, but it was only a few years ago, in their old age, that Mr Fong's parents finally returned.

"My dad would not have been able to do that if he had clung on to the past," said Mr Fong.

"In fact, my parents made it a point to shield us from the past, so that we could grow up with a clean slate."

He added: "My mum used to say that when she was younger, she was very angry and wanted to outlive Lee Kuan Yew. But now, she says that was such a meaningless thing to hold on to."

The older Mr Fong eventually penned a memoir, which was released in 2009. A copy was sent to Prime Minister Lee Hsien Loong, who thanked them for the book in a letter that was signed personally.

Mr Fong said that there is no reason to feel resentful about the past.

"It was not a bad life for me. I am glad I did not have to share my dad with a million other urgent national issues, should history have turned out differently," he told The Sunday Times.

"I'm also a beneficiary of the Singapore system," added the Chinese High School and Hwa Chong Junior College old boy. "It's not a perfect system but it's not a bad system, and one that works better than many others."

And despite the history between Mr Lee and his father, Mr Fong is full of admiration for the founding Prime Minister.

"Don't forget Singapore, at the time, was under the influence of many strong forces, so to make things work in a short time, you really had to be the strongman and a bigger, more unreasonable force. Even the gangsters will have to fear you, in order to push things through peacefully," he said.

"He may not have been the originator of every idea and people may not agree with him, but he was able to stand there and say, 'This is the issue that I stand behind and if you have a problem, you deal with me.' I thought that was pretty cool."

But what of his family's reaction to Mr Lee's passing?

"We did not say anything. It had all been said before," said Mr Fong. "But as I looked at everyone queueing up, I wondered how many of them would do the same thing for their loved ones while they were still alive.

"There is a difference between forgiving and forgetting," he added. "Forgiving is about letting go, forgetting is not healthy for history."