SINGAPORE - Inside a lab in Temasek Polytechnic, dozens of mud crabs are scuttling, feeding and breeding - to meet Singaporeans' insatiable appetite for chilli crab and black pepper crab.

Due to over-harvesting and bad weather conditions brought by global warming, the mud crab populations in the Philippines, Indonesia, Sri Lanka and Malaysia have dwindled by 30 per cent. Many crabs are also harvested before they reach maturity, which is an unsustainable farming practice.

The crustaceans - from tiny crablets to two-year-old female crabs waiting patiently to bear eggs - are housed in the Aquaculture Research Facility within the Centre for Aquaculture and Veterinary Science (CAVS).

They are reared in a clean and sustainable manner, to eventually replenish the population here.

The Aquaculture Research Facility is part of the newly launched Aquaculture Innovation Centre.

Within 15 months, about 300 crabs have been produced in the lab through a few batches of spawning. Five years ago, the project started with three or four mud crabs obtained locally.

The eggs produced have a 75 per cent hatching rate, but as the crab larvae transform to crablets and full-fledged crabs over phases, some do not survive.

The researchers suspect that this is due to the lack of optimal nutrition. 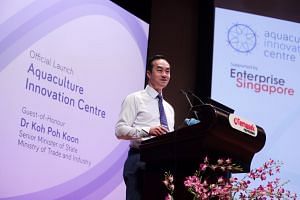 "Since some of them die off because they struggle while moulting their shells, it shows that the crabs may be lacking in calcium," said Dr Diana Chan, head of CAVS.

The lab crabs are also greyish-blue in colour, unlike their wild counterparts which are dark brown.

This is because the crabs were fed on commercial food pellets normally used for groupers, that lack pigmentation.

Last week, the research team created the first batch of home-grown pellets in the institute's feed-making facility by adding substances like fatty acids, alternative proteins and pigmentation to the commercial feed. Dr Chan said the crabs are responding well to the new food.

It will take another few months of trial and error to create the most optimal feed for the crabs so they can survive and grow faster.

Then, the researchers will selectively breed them to produce the meatiest and fastest-growing crabs.

The research project’s goal is to build a crab hatchery to supply high-quality crablets to local farms by the end of the year.

Additional crabs will be returned to the wild here.