Members of a landmark 11-nation Pacific Rim trade deal have signalled their openness to expand the agreement by taking in new members to form a stronger united front against the rise of protectionism.

Following a meeting in Tokyo yesterday - the first since the pact came into force on Dec 30 - participating countries in the Comprehensive and Progressive Agreement for Trans-Pacific Partnership (CPTPP) highlighted in a joint statement the importance of maintaining and strengthening the principles of an open, inclusive and rules-based trading system. This comes amid growing concerns over recent trends towards protectionism, they added, reiterating that the pact is open to all economies which accept these principles and are willing to meet its standards.

They also "confirmed their strong determination to expand the agreement through the accession of those new economies".

Signed on March 8 last year, the CPTPP is a revived version of the Trans-Pacific Partnership after the United States' withdrawal. It brings together economies from both sides of the Pacific, representing 500 million people and US$10 trillion (S$13.5 trillion) in gross domestic product, or about 14 per cent of the global economy.

Australia, Canada, Japan, Mexico, New Zealand, Singapore and Vietnam have ratified the deal. The other countries involved are Brunei, Chile, Malaysia and Peru.

Trade experts and Asian diplomats suggested earlier this month that the US and China are highly unlikely to join the CPTPP.

China, which is involved in a tariff war with the US, is pursuing the Regional Comprehensive Economic Partnership, though negotiations for the mega trade agreement between Asean's 10 member states and India, Australia, New Zealand, South Korea and Japan have stalled.

New Zealand's Minister for Trade and Export Growth David Parker said before leaving for Tokyo that the CPTPP coming into force "is a significant milestone" that is already giving exporters better access, including to Japan, Canada and Mexico where it previously had no free trade agreements. 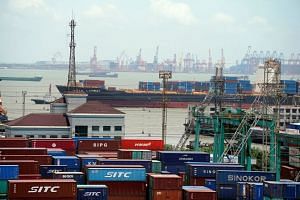 CPTPP: A not-so-little gift for free trade that may keep on giving

Apart from reduced tariffs upon coming into force, the pact also gives Singapore businesses preferential access to the services sectors of CPTPP markets. Other benefits include bidding for government projects which were previously closed to foreign bidders.

Yesterday, ministers welcomed the seven signatories' early ratification and implementation, expressing hope that all 11 members will formally endorse the accord early.

The joint statement, however, recognised that Malaysia is still evaluating the agreement and its decision concerning ratification. Malaysia's Minister of International Trade and Industry Darell Leiking last Thursday said Putrajaya will not rush into ratifying the CPTPP. With the pact being signed before the Pakatan Harapan government came into power last May, he told South China Morning Post that the authorities want to ensure its terms are fair to the country.

CPTPP members also expressed their firm commitment yesterday to fully implement the agreement, to send a "strong signal in support of free trade" and put in place rules suitable for the 21st century.

In a speech at the meeting, Singapore Trade and Industry Minister Chan Chun Sing urged members to grow the CPTPP, and said: "The entry of new parties... is crucial."

"Expansion would accelerate and deepen regional economic integration; as well as anchor the CPTPP as one of the pathways towards the Free Trade Area of the Asia-Pacific," he added.

On the sidelines, he noted the agreement has to be implemented "smoothly and expeditiously", assuring interested parties they can come on board without difficulty.

Another factor to consider is how it takes shape, such as whether it is "progressive", meaning it keeps pace with the times and is likelier to attract more countries.

Thailand was among the countries mentioned, noted Mr Chan. Other potential entrants mentioned in past reports include South Korea, Indonesia and Britain.

On how Singapore can benefit, Mr Chan said the deal means the Republic's economy can be integrated with a "much bigger market". Businesses will be able to source products from more places at more competitive prices, on top of having a larger market to sell to. Other benefits include a diversification of risk, so the country is not beholden to how any particular market performs.