SINGAPORE - Central Provident Fund (CPF) members who want to take bigger risks to grow their nest egg, but lack the time or know-how to do so, can look forward to a new, simplified retirement investment scheme.

A government-appointed panel on Wednesday (Aug 3) suggested that the CPF introduce a low-cost investment option for its members that offers a smaller number of funds, which do not need active management.

The Lifetime Retirement Investment Scheme (LRIS) is meant to address "limitations in the current system", as an existing high-risk investment option has not helped many members to realise returns superior to CPF interest rates.

The panel recommended that the LRIS should offer a small number of well-diversified funds for long-term investment. 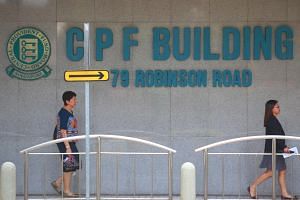 These should not be managed actively, which would incur higher management fees, but passively by a single administrator.

The panel observed that rising incomes means more members, especially younger ones, want to invest, but lack the time or experience to actively manage investments.

The LRIS aims to bridge the gap between leaving one's savings in the Ordinary Account (OA) or SA, and putting them into the CPF Investment Scheme (CPFIS), a higher-risk option more suitable for savvier investors.

OA funds are invested in risk-free government bonds, which earn interest rates pegged to the short-term ones of major local banks. These funds need to be liquid so that members can withdraw them on-demand for purposes such as housing, unless they decide to forgo this so they can transfer some savings to their SA account to earn higher interest rates.

CPF members can currently invest their OA and SA savings above the first $20,000 and $40,000 respectively through the CPFIS, which has more than 200 funds to choose from.

At the end of last year, $20 billion of OA savings and $5 billion of SA savings were invested through the CPFIS.

An estimated $75 billion in OA and $30 billion in SA could potentially be invested.

Because the CPFIS operates under a retail model, investment fees are high - as much as 3 per cent for sales charges and 1.75 per cent for annual fees - and this significantly erodes returns.

This is made worse when inexperienced investors buy and sell their investments frequently, instead of letting them stay put to ride out any short-term market volatility.

The analysis showed that it was reasonably probable for funds such as these to enhance savings for members willing to take some risk.

Static risk funds with higher risk were most likely to achieve this, but maintaining these risk profiles until retirement might result in an "event risk", a major negative return in the wake of a market fall during the investor's autumn years, which would not allow enough time for recovery.

This could be mitigated through a life-cycle approach, in which the exposure to risk such as equities is reduced the closer the investor gets to retirement.

The panel advised the Government to establish an expert investment council to set up and implement the LRIS.

It also suggested the Government review the CPFIS so it can be better targeted at experienced investors.