SINGAPORE - Covid-19 vaccines are able to prevent infection at a rate of about 40 per cent, but vaccines continue to be very effective in protecting against severe illnesses and death, Health Minister Ong Ye Kung said.

Speaking during a virtual press conference on Friday (Sept 3), Mr Ong said the Delta variant is a lot more infectious and has resulted in more vaccinated people being infected.

"Vaccines still protect a person against infection, but the strength of the protection will come down as antibodies wane several months after the vaccination," said Mr Ong, who co-chairs the multi-ministry task force tackling Covid-19.

Associate Professor Kenneth Mak, who is Singapore's director of medical services, said that although being fully vaccinated does not mean a person will never get Covid-19, it still greatly reduces the chances of needing intensive care or dying.

"This is a sevenfold reduction in the rate of severe infections or death, a stark difference which actually demonstrates the protective benefits that vaccination provides."

Responding to a question on the degree of protection offered by the Sinovac vaccine, Prof Mak said the number of individuals who took the Sinovac vaccine in Singapore is relatively small and there is not enough data to make a conclusion.

Sinovac is currently available in Singapore under the Special Access Route but is not part of the national vaccination programme.

Prof Mak added that it is too early to say whether or not "breakthrough" infections in Singapore - which refer to infections among fully vaccinated people - occur as a result of those who previously received the Sinovac vaccine.

Additionally, the Ministry of Health will soon change how it reports the Covid-19 situation in its daily update in order to reflect the salient issues the country is facing in the next stage of its fight against the virus. 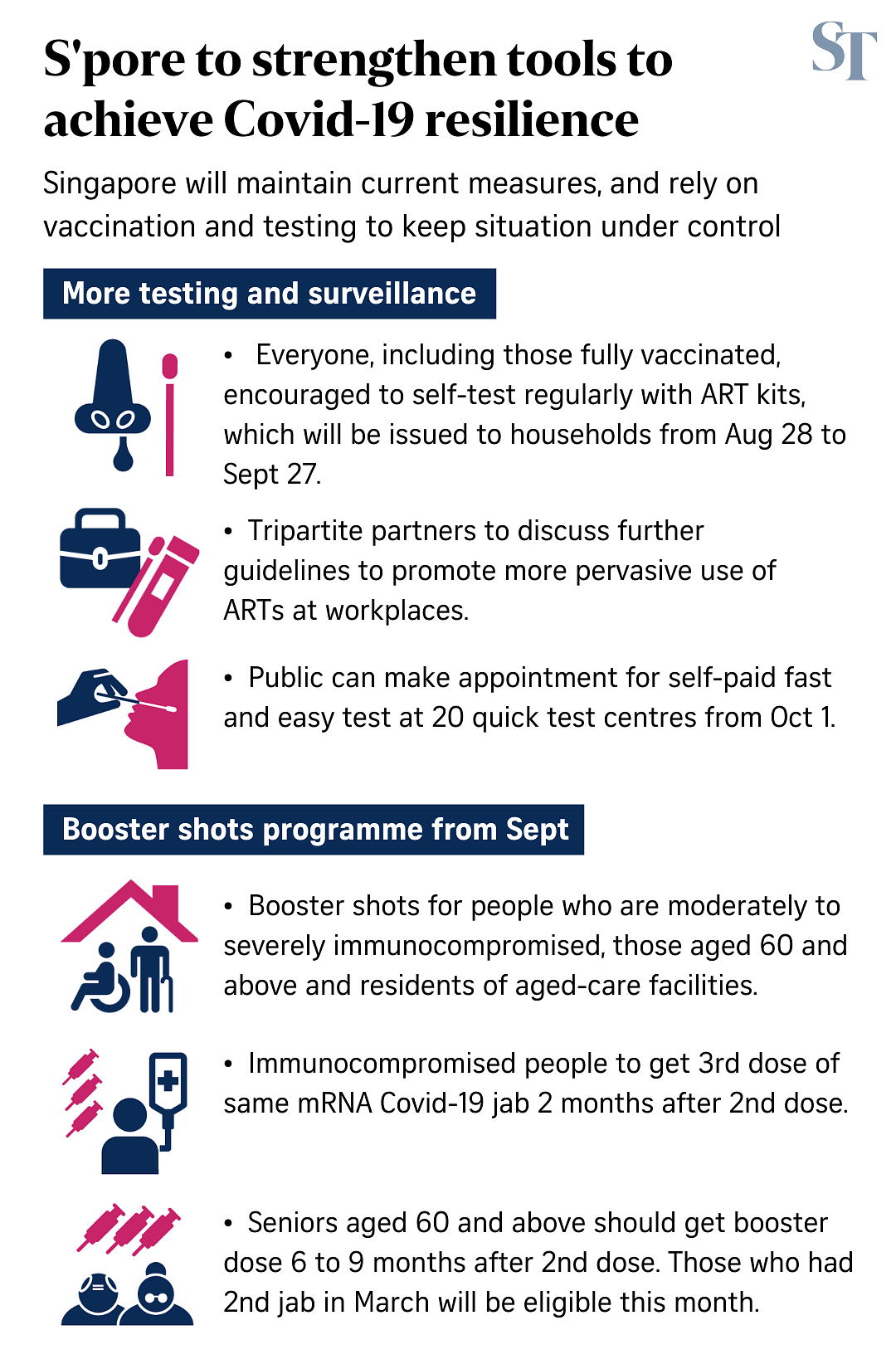 “We are now in a very different stage of our battle against Covid-19. In the past, we tried to suppress every cluster, trace down to the last infection, and try to eliminate them,” Mr Ong said.

“With the more transmissible Delta variant, this will be very challenging to do and we may not be prepared to pay the price of doing so, in the form of border closures, circuit breaker and heightened alert. It is just not sustainable.”

While vaccination remains key, the minister noted that Singapore already has a high vaccination rate of more than 80 per cent, and that figure is plateauing. Given this, there is no longer a need for the MOH to go into so much detail in its daily reports, he added.

“Perhaps when there are booster shots (being administered), we can start monitoring that,” said Mr Ong.

The number of unlinked cases is also less relevant, now that Singapore is no longer trying to “chase down every single case”, he said.

“Linking is important when you want to eradicate the virus, but once we are prepared to say that we can live with it, we vaccinate ourselves so that we don’t fall very sick, treat it like influenza. Then I think the need to link everything becomes less important.”

Instead, the reports will focus on things the public can act on such as information on emerging clusters so people can avoid certain places or regulate their own activities, Mr Ong noted.