SINGAPORE - The biggest news topic last year, a virus which has affected all aspects of people's lives around the world, dominated Singapore Press Holdings' annual journalism awards for its English/Malay/Tamil Media Group on Wednesday (March 17).

A majority of the 17 winners were recognised for content directly related to the coronavirus and its fallout, in part reflecting the attention and resources newsrooms devoted to the coverage.

Among these is the Cross-Media Package of the Year, produced by The Straits Times in September last year after the world lost more than one million lives to Covid-19.

Including an interactive chart that showed how daily deaths from Covid-19 changed over time in different continents and regions, it tracked how the virus spread from Wuhan, China, where it was first detected to the rest of the world in the nine months since the first case was announced.

It also included 12 stories that offered both big picture reflections on how the virus spread so quickly and profiles - with videos - of individuals who had recovered from or knew someone who died from the virus, allowing readers to see these individuals as more than impersonal statistics.

A related winner was senior executive sub-editor Fraemone Wee for Layout of the Year for ST's front page on Sept 26 last year. Headlined "1,000,000 lives lost to Covid-19: World set to cross grim milestone this weekend", the page was sombre and stark, with the number splashed across its centre under a photograph of graves in Brazil. 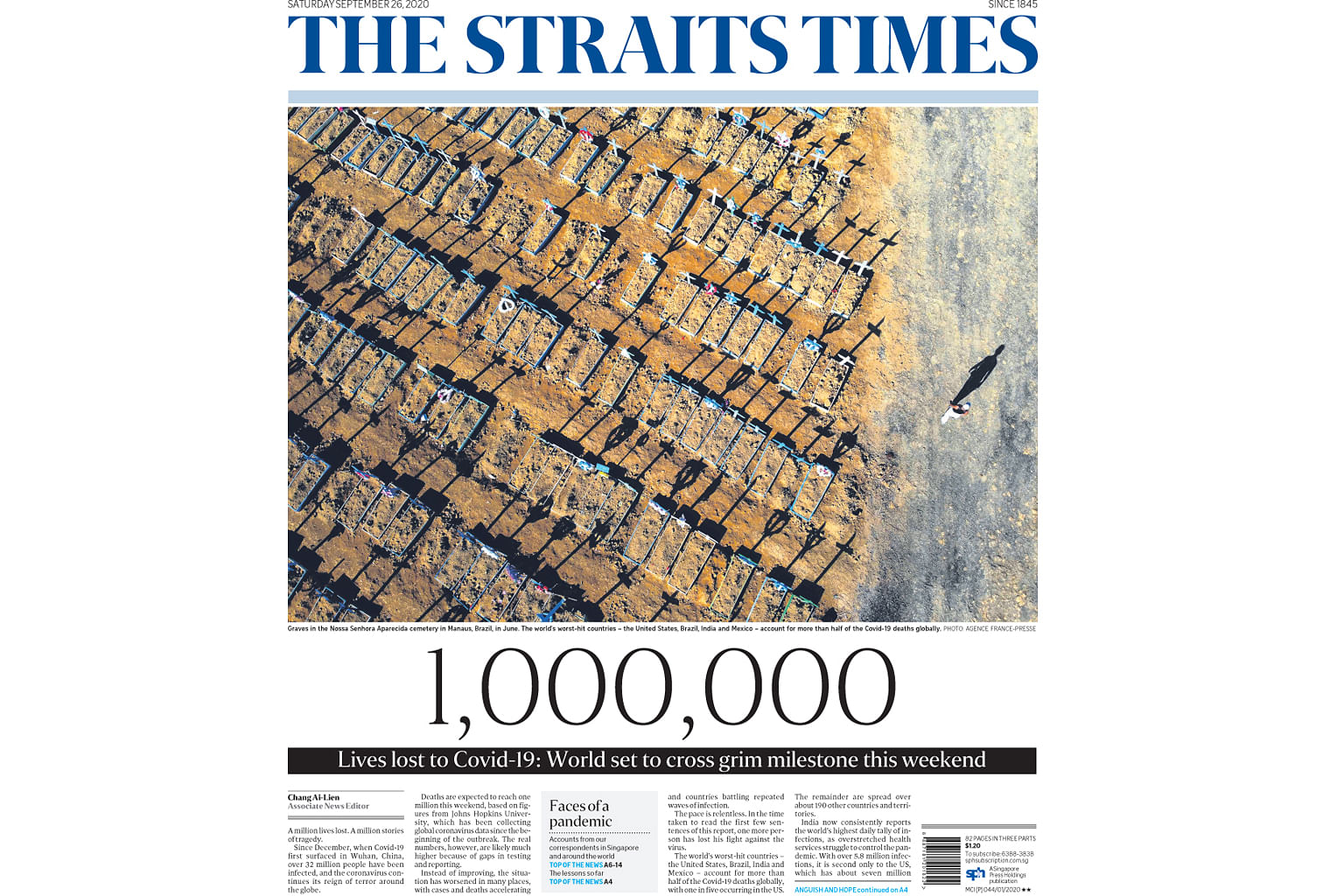 ST executive photojournalist Chong Jun Liang won Picture of the Year for his photograph of people walking across the Causeway from Malaysia to Woodlands Checkpoint just hours before Malaysia stopped its citizens from travelling abroad in March last year.

It was taken shortly before 10pm on March 17 last year, with crowds of people - some families walking hand-in-hand - trudging to Singapore in the dark to beat the movement control order the Malaysian government had imposed in response to the coronavirus.

In the Illustration of the Year category, ST executive artist Manuel A. Francisco beat out others with his illustration accompanying a piece on how Singapore can adapt to get ready for the new normal.

Published in the early stages of the pandemic in February last year, the illustration showed the back of a man's head, with what at first seeming to be mask straps actually hands grabbing each other in support. It encapsulated one of the piece's messages, that people need to be more socially responsible and that more trust and empathy is needed in public health crises.

Three of the six Special Awards for Excellence were also related to the coronavirus.

One went to ST's China correspondent Elizabeth Law who, with her stories last year, tracked Wuhan's initial nonchalance, then trauma and resilience from ground zero of Covid-19.

SPH Brightcove Video
Nearly a year since the coronavirus first emerged in a market in Wuhan, life has largely returned to normal in the central Chinese city. But a closer look shows the scars that still remain and a constant worry of a resurgence.

The second went to ST executive photojournalists Benjamin Seetor and Mark Cheong for their video, A City At A Standstill, of Singapore's deserted streets during the circuit breaker period.

SPH Brightcove Video
After Singapore went into circuit breaker mode on April 7 to stem the spread of Covid-19, traffic cleared and crowds disappeared. Flying a drone over the city, photojournalists Benjamin Seetor and Mark Cheong captured the surreal sights from above.

The third, an interactive infographic produced by a team led by ST assistant news editor Toh Yong Chuan, took viewers on a virtual 200km drive around the island to promote domestic tourism and satiate those who miss their motoring trips up north to Malaysia, with borders shut amid the pandemic.

The other three special awards were won by The New Paper's David Sun, who is now with ST, for his range of exclusive stories that included the National University of Singapore probing students for cheating during their home exams and cigarettes and booze being smuggled into dormitories during their lockdown; a team headed by ST senior correspondent Zaihan Yusof who unearthed a network of drains used by suspected illegal immigrants to move around; and the team behind Berita Harian's The BM Show, a weekly lifestyle programme broadcast on the Malay-language publication's Facebook and Instagram pages on Sunday mornings.

The Story of the Year, one of the most coveted awards, was won by ST's Malaysia Bureau Chief Shannon Teoh for his story "Malaysians await outcome of meeting over state of emergency", when Malaysian Prime Minister Muhyiddin Yassin met King Sultan Abdullah Ahmad Shah for discussions on how to avert snap polls that could prove disastrous amid Covid-19.

More On This Topic
Malaysians await outcome of meeting over state of emergency
9 months and 1 million lives later, the world continues to battle Covid-19

Other non-Covid-19 related notable winners include the Video of the Year award won by ST's General Election 2020 polling show, which provided viewers with real-time updates on election night, and ST's Infographic of the Year winner "How many times has your constituency changed?".

SPH chairman Lee Boon Yang said at the virtual ceremony that the pandemic is burned deeply into people's collective memory, with its massive disruption to people's lives and the economy, and newsrooms had done great work reporting on it.

"We need to keep up with this effort. Apart from delivering news and pandemic-related information, we also had to debunk fake news and misinformation, which was creating confusion and anxiety," he said.

"This continues to be a very important service to our audience."