SINGAPORE - A Singaporean tuition teacher has confessed to her role in an elaborate plot to remotely feed answers to GCE O-level examination papers to six Chinese national students here.

The students smuggled carefully-concealed mobile phones and bluetooth devices into exam halls in 2016 and the answers were whispered to them over the skin-coloured earphones that they wore. The Singaporean tuition teacher Tan Jia Yan would also sit for the exam as a private candidate and beam a live feed of the paper she was attempting to her accomplices, using Facetime.

The accomplices, in turn, would supply the answers to the students from China.

On Monday (April 16), Tan, 32, admitted before a district court that she - along with three others - had helped the students cheat.

Tan was employed at Zeus Education Centre in Tampines Street 34 and among those accused of being her accomplices are the centre's principal Poh Yuan Nie, 52, also known as Pony Poh, and her niece Fiona Poh Min, 30, who also taught at the centre. Both are Singaporeans while the third person who allegedly took part in the operation was Chinese national Feng Riwen, 25.

The court heard that another Chinese national, Mr Dong Xin, 30, who is a Singapore permanent resident and the director of a company known as Nou Cheng, had referred the six students to Zeus to prepare them for the 2016 GCE O-level examination.

Mr Dong and Zeus had signed contracts stating that for every student he referred to the tuition centre, Poh Yuan Nie would receive $8,000 in deposit and $1,000 in admission fees. The catch was that the money was to be fully refunded if the students failed to pass their examinations.

Tan earned $3,000 a month and she received an additional $1,000 per student from Poh Yuan Nie for providing lodging to the students.

The court heard that when the exams began in October 2016, the tuition centre principal would get her niece, Tan and Feng to help attach wearable bluetooth devices, linked to mobile phones, to the students' bodies. 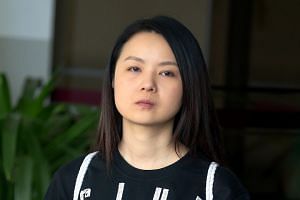 Tuition agency owner, whose worker is linked to exam cheating scam, fined for lying to police

Deputy Public Prosecutor Vadivalagan Shanmuga said: "These mobile phones were also well concealed under the students' clothing. The trio had also helped to place a skin coloured 'in-ear' earphone on all of the students. Armed with these communication devices, the students attended the examinations at their respective examination centres."

Fiona Poh would use sticky tape to secure a camera phone to Tan's chest, who would hide it under her clothes.

Tan would then take the exam as a private candidate, and use communications application Facetime to beam images of the paper to her three accomplices at Zeus.

Fiona Poh and Feng would work out the answers and convey them to the students over their earphones.

DPP Vadivalagan said that the "sophisticated cheating operations" ran uninterrupted from Oct 19 that year. On Oct 21, Tan and Fiona Poh swopped roles for the Mathematics 2 paper.

The plot unravelled on Oct 24 when an alert invigilator spotted one of the students - Chen Yi - behaving suspiciously inside the exam hall. She thought she could hear transmission sounds coming from him and reported the matter to her superiors.

The student was allowed to finish the paper but was later escorted to the invigilators' holding room where he was asked to remove his vest. He came clean about his involvement with Tan and the three others after the communication devices were found on his body.

Tan, who pleaded guilty to 27 cheating charges on Monday, will be back in court on May 15. A trial involving her three alleged accomplices will start on Tuesday.