The estranged wife of Philippe Graffart submitted a victim impact statement to the court, making various allegations against her husband and the killer of their only child.

Judicial Commissioner Hoo Sheau Peng said she took into account that the statement showed the "grief, loss and suffering experienced by the mother of the child".

But the judicial commissioner made clear that the allegations did not weigh into the sentence imposed on Graffart.

In the statement submitted through the prosecution, Mrs Gwendoline Graffart claimed that her husband had threatened to "kill my son".

Rebutting this in his mitigation plea, Graffart's lawyer Ramesh Tiwary said the allegation is misleading and completely untrue. "Our client has never threatened any kind of hurt or injury to Keryan," he said. 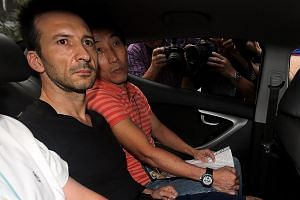 Mrs Graffart also alleged that her husband had threatened her, which Mr Tiwary said is irrelevant as his client is not charged with committing any offence against her.

She also made various allegations regarding finances. She claimed Graffart owes taxes in Luxembourg - where the couple met and lived before moving to Singapore - and that she is liable for them.

She also alleged that his creditors have approached her for repayment. Mr Tiwary insisted that his client has settled all his taxes and did not owe her any money.

She also mentioned that she would have to spend €4,000 (S$6,100) for Keryan's last rites. Mr Tiwary said his client accepted that it was his responsibility, but this was not the place to discuss funeral costs.

Responding to a press statement by Mrs Graffart, in which she expressed shock at the sentence and disputed the account of events Graffart admitted to, the Attorney-General's Chambers (AGC) reiterated the words of the judicial commissioner, that this was a tragic case and that the accused's actions had caused "immeasurable pain to the parties left behind".

"In deciding on the sentence, the court determined that the offence was of a serious and grave nature and had been committed by a parent against a young and vulnerable child," said an AGC spokesman.

The spokesman added that Mrs Graffart was "afforded the opportunity to convey to the court the matters that she considered relevant for the purposes of sentencing".

A version of this article appeared in the print edition of The Straits Times on August 23, 2016, with the headline 'Wife's allegations did not weigh into sentence imposed'. Subscribe
Topics:
More
Whatsapp Linkedin FB Messenger Telegram Reddit WeChat Pinterest Print Purchase Article Copy permalink