Yang Yin pleads guilty to misappropriating $1.1m from widow as his web of lies is exposed

Madam Chung Khin Chun, described as a "particularly warm, friendly and trusting person", lived modestly. But in the four years after Yang Yin moved into her Gerald Crescent bungalow to his arrest, her cash savings went from $2.7 million to just $10,000.

This was revealed yesterday when Yang, 42, pleaded guilty to misappropriating $1.1 million from the 89-year-old widow.

Since being accused by her niece of exerting an undue influence on the rich elderly woman, the former China tour guide has stuck to one narrative: that she saw him as the "grandson" she never had, and wanted him to move in and take care of her. That was why she wanted to leave her considerable assets to him.

Yesterday, the story was exposed as nothing more than a fiction. He came to Singapore simply to benefit himself and his family.

Throughout the saga, Yang claimed that Madam Chung needed his help at home.

But Immigration and Checkpoints Authority records showed that he was frequently away from Singapore. Between September 2009 and September 2014, he left Singapore on 43 occasions and was away for a total of 307 days.

He never took Madam Chung, who was diagnosed with dementia in April 2014, to see a doctor or a psychiatrist.

All household chores, including cleaning and cooking, were done by maids. Yang also ate breakfast alone as he woke at around 10am to 11am, far later than Madam Chung.

"The accused claimed that Madam Chung had accepted him as her 'grandson' on a Beijing trip in 2008, and addressed him as such. This is false," said Deputy Public Prosecutor Sanjiv Vaswani in the statement of facts. "The accused also claimed that it was Madam Chung who had asked him to move to Singapore to live with her as her grandson. This is also false."

It was in 2006 that Yang, then a tour guide, first met Madam Chung. During the visit to Singapore, he told Madam Chung's friend, for whom he had organised a trip, that he was interested in art. She took him to the home of Madam Chung, an avid art collector.

The next meeting was in 2008, when Yang organised a Beijing trip for Madam Chung and her friend. During the trip, he started addressing the women as his grandmothers and urged them to call him "Xiao Yang" ("Little Yang").

From then on, Yang would periodically call Madam Chung, who was at a vulnerable time in her life after her husband died in 2007. He told her he often visited Singapore and she said he could use a spare room in her house to save on hotel charges.

In February 2009, he stayed there for a month. During the time, he persuaded her to give him $40,000 by claiming he needed to buy a car in China to practise driving since he had just got his licence. In truth, he did not have a licence.

He also told her he wanted to quit his job and find one in Singapore. But it has since been proved that the most he did in this regard later was to set up a fake music and dance company.

In July 2009, Yang returned for a month and told Madam Chung he would help manage her finances. Soon, he realised the extent of her savings and investments. 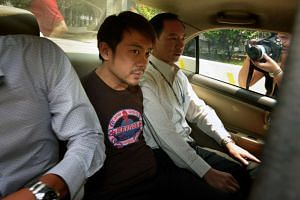 Yang now admits he had in fact purchased a $200 fake.

To avoid suspicion, the sum was moved from the widow's bank account to his, then back to her account, before landing in his father's account in China.

He also tried to conceal his misappropriation of $600,000 by lying to the police that he had used the sum to buy five paintings for her.

During the trial, Yang lied that Madam Chung had given him all of her monies. These included over $300,000 that she entrusted to him to purchase a condominium unit on her behalf; $70,000 she gave for insurance policies in his name but monies from which were meant to benefit her when the policies matured; and a further $600,000 she wanted him to invest.

These sums, including the proceeds from the sale of the condo unit, have been seized by the authorities.

In 2010, he also influenced Madam Chung to change her will - which left most of her money to charity - to one that benefited him. The will has since been revoked by the courts.

Yang is expected to be sentenced on Sept 9.

A version of this article appeared in the print edition of The Straits Times on August 17, 2016, with the headline 'Widow's $2.7m savings down to $10k in 4 years'. Subscribe
Topics:
More
Whatsapp Linkedin FB Messenger Telegram Reddit WeChat Pinterest Print Purchase Article Copy permalink