SINGAPORE - Businessman Mark Tan Peng Liat, now 31, was convicted in court on Thursday (June 8) of a lesser charge of committing a rash act that led to his father's death.

After a nine-day trial, District Judge Eddy Tham did not find him guilty of his earlier charge of culpable homicide not amounting to murder.

On Oct 12, last year, Mark Tan testified that he was driving home when his father phoned and accused him of theft.

The court heard that an angry Mr Tan Kok Keng had ordered him to come home immediately. The two men got into a scuffle shortly after Mark Tan arrived home.

Following his arrest on Feb 10, 2015, Mark Tan admitted to the police and an Institute of Mental Health psychiatrist that over five years, he had been making regular withdrawals of up to $5,000 per transaction from a joint bank account which he shared with his father and sister. 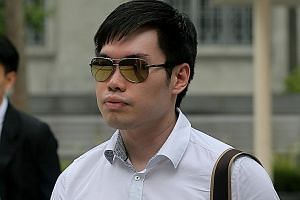 Experts differ on how man died after row with son

West Coast death: Victim was injured over a 'considerable time', had force applied to neck

It was not mentioned in court then how often he made the withdrawals or how much he had taken in all.

Mark Tan also told the court that his father was the sole contributor to the account.

However, he had said that the older man never explicitly told his children that they had to ask for his permission before making any withdrawals.

He also testified that during the scuffle he wrapped his right arm around his father's neck.

At the same time, he said he used his left hand to press down on the base of Mr Tan Kok Keng's neck.

The court heard that after a short while, Mark Tan noticed that his father had stopped struggling. He released his hold and left the bedroom without checking on him.

In the meantime, his father's Indonesian maid, Ms Sumarti Dwi Ambarwati, went to a nearby house belonging to Mark Tan's aunt, Madam Tan Hoon Choo, and told her about the fight.

In July last year, Madam Tan, 72, testified that she rushed to her nephew's home and found him looking "very bewildered and lost".

On Oct 12, last year, Mark Tan told the court that when they went upstairs together, they found his father lying face up on the floor.

His face appeared slightly darker than usual and his mouth was open.

He called for an ambulance and paramedics rushed Mr Tan Kok Keng to the National University Hospital, where he was pronounced dead.

Senior investigation officer, Assistant Superintendent (ASP) Tan Boon Kok also testified then that Ms Sumarti had since returned to Indonesia, and could not be traced even after Singapore police sought Interpol's help.

Mark Tan will be back in court on July 11.

Offenders convicted of culpable homicide not amounting to murder can be jailed for up to 10 years, and fined or caned.