Five teenagers were hanging out at a void deck, engrossed in their mobile phones, one recent weekday.

One of them was smoking.

Two Citizens on Patrol (COP) volunteers approached the group of teenagers to tell them that smoking is prohibited at the void deck. The group ignored them and continued playing games on their phones.

Staff Sergeant Sritharchana R. Jayaprakas, 31, a Community Policing Unit (CPU) officer who was accompanying the volunteers, then asked the teenager who was smoking to step aside from the group and spoke to him separately at a corner of the void deck.

She told The Straits Times: "I knew I had to isolate him because he would not want to lose face in front of his friends. He started to listen only when I told him what he did was wrong and that I could issue him a summons."

The teenager was let off with a warning.

This means, for example, that Staff Sgt Sri and the other CPU officers in Hougang have to reach out to a total of 318,000 households.

The 570 CPU officers in Singapore get around on bicycles or by getting rides in police vehicles.

But they usually walk. Said Sgt Alvin Chua, a colleague of Staff Sgt Sri: "We patrol on foot. This way, we can mingle with members of the public and (be) closer to them."

While they are dressed for the local weather in their casual attire, CPU officers still carry a 6kg load comprising a revolver, baton, handcuffs, radio set and torch light.

Officers can clock as many as 13,700 steps, or about 8.2km, in a day by climbing stairs or accompanying volunteers. 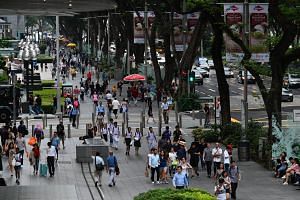 "Patrolling is quite a workout," said volunteer Kwa Yong Peow, 56, who is vice-chairman of Hougang Zone 8 Residents' Committee. "But we need the (CPU) officers' presence to assure the public the neighbourhood is safe."

If CPU officers were to spot a crime, they would respond just like their peers in blue.

On house visits, CPU officers follow up with residents who have lodged police reports and advise them on their next course of action.

"We want to assure them that we are here," said Sgt Chua, 28. "Keeping the community safe is a two-way street with police and residents working together."

CPU officers would also give residents and students crime prevention tips, or raise public awareness about the SGSecure initiative by reminding residents on what to do in a terror attack.

Hougang is made up predominantly of Housing Board flats and there is a kampung spirit in the area, said Staff Sgt Sri. But this also means that some residents feel it is safe to leave their belongings unattended.

"There was a spate of bicycle thefts and we had to educate neighbours on the use of bicycle locks," said Staff Sgt Sri. It is important to remind the residents that they have to keep their bicycles locked and secured when left outside their flats, she added.

Police officers tend not to eat in public while in uniform for various reasons, such as the inconvenience of doing so while carrying police equipment.

But the Hougang CPU officers are more than happy to join residents for a meal in public to foster better ties with the community.

Three executives working for a new condominium project in Hougang, who are not Hougang residents, were caught off guard when Sgt Chua and Staff Sgt Sri joined them for drinks at a coffee shop.

One of them, who gave his name only as Mr Suresh, said: "At first, I thought we were in trouble. But when the officers did not ask for my identity card, I knew they just wanted to chat."