SINGAPORE - After gambling away their cash at the Marina Bay Sands (MBS) casino, two Vietnamese tourists came up with a plot to recoup their losses that some would think was bananas: to break into a fruit store in Pasir Panjang.

Yet 23-year-old Nguyen Van Nhat and Ngo Quang Phuoc, 35, did just that, hacking and cutting through a safe to steal half a million dollars in cash.

On Thursday (March 10), the pair were jailed for 4½ years each after both pleaded guilty to a charge of housebreaking at night to commit theft.

They caught a bus to Singapore from Malaysia on New Year's Day and checked into a budget hotel in Geylang. The next evening, they spent a few hours gambling at the MBS casino and lost a "significant amount of money", a district court heard.

Two days later, Nguyen took Ngo to Pasir Panjang Wholesale Centre to show him the wholesale company where he used to work as a packer, Loh Ee Seng Trading Company.

The next morning, both realised they did not have enough money left to buy their flight tickets online.

Ngo then suggested that they steal some money, and Nguyen told him that he had seen his old boss keep cash in the second floor office.

They agreed that Ngo, a former construction worker, would break into the company to steal money, while Nguyen acted as a lookout.

They bought $316 worth of tools from a hardware store and headed to the building. 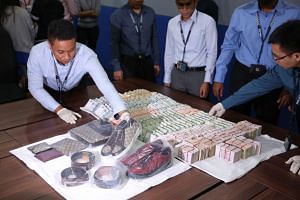 At about 12.40am on Jan 5, Ngo entered from the rooftop, after removing a ventilation fan. He then climbed a ladder and went through a window into the office.

Using an electric grinder, a screwdriver, safety goggles and a safety helmet, he spent nearly two hours cutting and hacking at a safe box.

He was "shocked" to see the bundles of cash inside the safe, and left with four bags filled with money. They were so heavy that he had to leave one hidden on the roof, the court heard.

But the duo did not manage to return for it.

After splitting the loot and buying their tickets, the duo booked hotel rooms at MBS before going on a shopping spree for luxury items.

They were arrested in their rooms later that day after the store's owner reported a break-in.

Nguyen and Ngo could have been jailed for 14 years and fined.