SINGAPORE - Five men hatched a plan to take revenge on a nightclub's bouncers over a dispute by setting it on fire with Molotov cocktails the next day.

But when they realised their hiding spot was too far from their target - Club Hollywood at St James Power Station - they hurled the homemade explosives at the nearby Postbar, sending bouncers and patrons scurrying to safety.

On Tuesday (March 12), two of the five were sentenced to jail, having earlier pleaded guilty to one charge each of committing mischief by fire.

The court had earlier heard that Toh and Tay were part of the group led by their friend Bryan Ho, 28.

Ho had been thrown out of Club Hollywood by its bouncers on Sept 12, 2016, following a dispute with other patrons.

He hatched the revenge plan, and roped in his younger brother and three friends to carry it out. Tay and Toh bought the bottles, socks and petrol to make the explosives.

Just after 2am on Sept 13, Tay parked a car across the road from St James where he and Toh remained, while Ho, his brother Cephas and friend Eugene Lim set off with their Molotov cocktails. 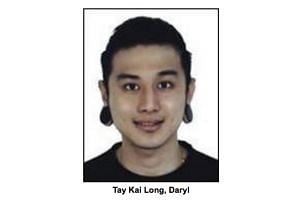 However they realised their target was still a distance from their hiding spot behind some parked cars.

As such, they decided to throw the Molotovs at the outlet closest to the carpark, knowing it would be likely that they will thereby cause damage to property, said court documents.

Two bouncers stationed nearby managed to move away in time, and one of them also pushed a patron away to safety.

All five men fled but were arrested after extensive police investigations.

In Tay and Toh's sentencing on Tuesday, District Judge Kan Shuk Weng disagreed with the defence's statement that the acts were carried out in a "moment of indiscretion".

She said the attack was premeditated and had potential for harm, adding that it was a "totally unprovoked and unjustified" attack as the club was not related to the dispute.

Tay is currently out on bail and will begin his sentence on April 1, while Toh is being remanded pending his decision to appeal against his sentence.

Ho and his brother Cephas, 25, will be sentenced at a later date, while the charges against the last member of the group, Eugene Lim, have been abated after his death on July 11, 2017.

For committing acts of mischief by fire or any explosive substance, the duo could have been fined and jailed for up to seven years each.