The twin sisters who were fined last month for creating a ruckus at Simei Green Condominium in 2015 have filed civil suits against the property's manager. One sister included the manager's employer in her court action.

The two 50-year-old Chinese nationals filed their statement of claims in November 2016.

In her suit, Ms Tang Bei said she had gone to the condominium's management office to apply for a replacement access card in February 2015 as the one she had was faulty.

She said Mr Quek refused to process her application, then uttered "something to the effect that he would fall in love" with her. Ms Tang Bei then claimed that he assaulted her.

She also said that when she left the office, he followed her and shouted: "Get out of Singapore." Court documents said she suffered "indignity and emotional trauma".

She stated in her claim that Mr Quek again attended to her when she returned to the office on April 28, 2015. She claimed the condominium manager "directed xenophobic remarks" at her when she told him that she did not want to be served by him. 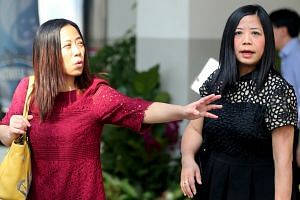 Ms Tang Bei said her sister, Ms Tang Lei, who was waiting outside, heard the commotion and went to help her. The claim stated that Mr Quek then directed "similar xenophobic remarks" at Ms Tang Lei before hitting Ms Tang Bei's head forcefully.

Mr Quek, who denied these accusations in court documents, said in his defence that Ms Tang Bei entered the condo management office in February 2015 "demanding" a resident-cum-access card and handed him $100.

He stated that she asked for the money to be returned after refusing to provide a photograph and proof of her residency in the condo.

"Suddenly and without warning, the plaintiff lifted the service counter flap and forced her way into the area behind the service counter... Instinctively, (Mr Quek) raised his hand... and managed to stop her," the condominium manager said in his defence.

A female colleague returned the money after Ms Tang Bei "retreated to her original position", he said.

Turning to the later incident, Mr Quek stated in his defence that Ms Tang Bei and her sister returned to his office on April 28, 2015. He added that Ms Tang Bei then said she did not want to be served by him. A scuffle broke out and the two women hit his face, according to Mr Quek.

The civil cases of the sisters, who are represented by lawyer Richard Siaw, are still pending.

Last month, District Judge Sarah Tan fined Ms Tang Bei $2,100 and Ms Tang Lei $2,500 after a 20-day criminal trial in July in connection with the ruckus at the condo.