Two twin sisters who flew into a rage and assaulted staff of Simei Green condominium in 2015 were fined yesterday.

The violent behaviour of Chinese nationals Tang Bei and Tang Lei, both 50 now, was caught on video, which went viral online.

The incident, which took place at 11.40am on April 28, 2015, happened after Tang Bei was caught earlier that year tailing other residents out of a side gate of the Simei Street 4 property.

The Singapore permanent resident was a tenant at the condominium but did not have a resident's pass. Court documents did not state if Tang Lei was a resident of the estate.

When he asked her if she was a resident, she replied that it was "none of his business" and that she had "no time for him" before walking out of the property.

The court heard that she went to the management office alone on Feb 25, 2015. Mr Quek told her that he needed documents such as an identity card and a stamped tenancy agreement to process her application for a condominium access card.

She handed him $100 to pay for it but did not provide the necessary documents. She became aggressive when Mr Quek repeated his request for the documents and she left after taking back her money. 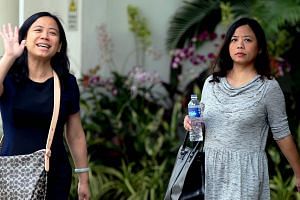 She returned with Tang Lei on April 28 that year but refused to be served by Mr Quek, claiming he had "dirty hands". He then decided to video-record the incident with his mobile phone, which he placed on a cabinet.

After Tang Bei berated Mr Quek, the two sisters rained blows on him. They spat at Mr Quek's face and Tang Lei splashed the contents of her canned drink at him. The women also assaulted Mr Bligh when he stepped into the office.

After the incident, Mr Quek went to Changi General Hospital where he was treated for bruises and abrasions on his forehead.

The sisters were represented by lawyers Richard Siaw and Jasmine Teo. In her defence, Tang Bei claimed she had acted in self-defence. DPP Tan said the claim was "incredible" and "flies in the face of the objective evidence".

The DPP stressed that the video footage shows the sisters attacking Mr Quek in "an unrelenting and vicious manner".