SINGAPORE - The former editor of a now-defunct sociopolitical website was convicted on four charges of sedition on Tuesday (March 8).

Australian Ai Takagi, 23, pleaded guilty to publishing the inflammatory articles on The Real Singapore news portal and its Facebook page.

She also admitted to another three counts of sedition and one charge of failing to produce financial statements on the website's advertising revenue to the police. These will be considered in sentencing.

Takagi and her Singaporean husband, Yang Kaiheng, 27, were expected to face a joint trial on Monday (March 8).

But before it began, she told the court she would be pleading guilty.

Her husband, however, is denying the charges.

The articles posted on TRS between October 2013 and February last year are alleged to have promoted ill will and hostility between different races or classes in Singapore.

Among the contentious articles is one in which Takagi adopted the Malay name "Farhan" to hide her identity as a foreigner while fostering xenophobia - an act Deputy Public Prosecutor G. Kannan found "outrageous". 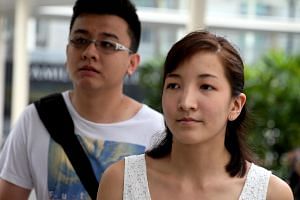 Among the four inflammatory articles was one where she falsely stated that a Filipino family caused a commotion between the police and participants of last year’s Thaipusam procession.

The prosecution said that Takagi had intentionally posted these articles to drive up traffic and to profit from it. Over 95 per cent of the website’s readers were from Singapore.

The court heard that TRS received more than 134 million page views in total from May 2014 to March last year, double that of the preceding year.

DPP Kannan said the website used advertising services by Google and Taboola, which display advertisements alongside articles. Each time an article is viewed on the site, an advertisement is displayed and TRS would be paid for it.

Despite this, Takagi had claimed that she “did not keep tabs” on the website’s traffic and also did not “give much thought” to advertising revenue, said DPP Kannan.

However, he added, her online chat transcripts showed otherwise, and she had expressed her frustration when the website ran into problems that caused traffic, and advertising revenue, to fall.

On one such occasion in September 2012, she sent a slew of messages over Skype to a programmer in just six minutes, and said: “We have already repeated many times to you, this is affecting our readership and also our earnings tremendously. Seriously, when can I get this fixed?”

Takagi had also put together a presentation titled, “Advertising with The Real Singapore”, in 2013, in which she said the website would work together with advertisers to produce advertorials.

During investigations, Takagi denied having a particular agenda, and said the articles she published on TRS were all based on “what people felt and submitted to her”.

But DPP Kannan said an editor’s note she had written made clear that the website wanted to “instil fear” in those who hired foreigners.

Takagi had also once said to a contributor that the style of writing on TRS “was one of portraying the mainstream media in Singapore as being biased”, he added.

He also said Takagi was not forthcoming with her answers on various issues during investigations. In three statements recorded by the police, she had answered “not relevant” no less than 101 times, he said.

Takagi sat in the dock solemnly as these facts of the case were read out.

The TRS website was shut down by its editors last May, after the authorities suspended their licence to operate the site and ordered them to take it offline.