SINGAPORE - In an inquiry into the death of Briton Stephen Begley, the coroner's court heard on Wednesday (July 25) that there was one lifeguard for every 50 participants in the water during the swim leg of the Singapore International Triathlon on Sept 10 last year.

General manager of the Triathlon Association of Singapore Eugene Ong testified that the ratio of lifeguards to participants complied with International Triathlon Union guidelines, the sport's governing body.

Six kayaks, two jet skis and a boat were also deployed. Mr Ong told State Coroner Kamala Ponnampalam that this is the recommended number of crafts for such events held locally.

But his association has started a review after the tragedy to examine ways to improve all areas, including safety requirements.

For instance, he said, the association may make it mandatory for would-be participants to fill up a self-evaluation questionnaire when they register, where they have to answer questions about their health.

Mr Begley's partner, Ms Vanessa Raymundo, who was present in court, queried him about the absence of scuba divers at the race. 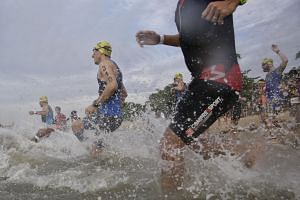 Mr Ong replied it was not efficient to deploy scuba divers as the water off East Coast Park, where the race was held, is "not very clear".

Mr Begley, who moved to Singapore in 2012 to work in the financial services field, was the designated swimmer of a three-man team and was supposed to tackle the 1.5km swim leg of the race.

His friends, Mr Paul Molloy and Mr Rob White, were to take on the 36km cycle leg and the 10km run respectively. Mr Begley, 42, encountered difficulties while swimming in the sea at around 10am that day and was taken ashore.

A medical crew administered cardiopulmonary resuscitation on him before he was taken to the Singapore General Hospital (SGH) where he died.

Mr Begley, who was 1.96m tall and weighed around 110kg, was a former professional rugby player.

Following the tragedy, the Triathlon Association of Singapore, which co-organised the race with event management firm Orange Room, released a statement saying immediate medical assistance and resuscitation were commenced at the event site.

"We also had a medical doctor with an automated external defibrillator and other medical equipment for resuscitation on site," the statement last year read.

The lifeguard and the kayak rower who attended to Mr Begley during the race are expected to testify in court when the inquiry resumes on Aug 15.