SINGAPORE - An Indonesian maid, who used to work for Changi Airport Group chairman Liew Mun Leong, 71, left behind three sealed boxes of items in his home after she was told to leave on Oct 28, 2016, a district court heard on Tuesday (April 24).

His son, former private banker Karl Liew Kai Lung, had earlier told Parti Liyani that he would pay for the boxes to be shipped back to her country.

The boxes were opened the day after Parti was told to leave as the family wanted to check their contents. That's when, Mr Karl Liew said, he, his mother and his wife found several of their valuables packed inside. The older Mr Liew then alerted the police on Oct 30, 2016.

On the second day of Parti's trial, Mr Karl Liew told District Judge Olivia Low: "We discovered there were items we had not seen for many years... I got a bit emotional as some of the items have sentimental value."

Parti, 44, faces four charges of theft involving more than $50,000 worth of valuables. She allegedly packed the stolen items into three boxes which she sealed at Mr Liew Mun Leong's house in Chancery Lane off Dunearn Road at around 1pm on Oct 28, 2016.

Parti is said to have stolen items including a Gerald Genta watch, a Prada bag, jewellery and a DVD player from the older Mr Liew, his daughter Ms Liew Cheng May, his daughter-in-law, Madam Heather Lim Mei Ern, and Mr Karl Liew.

Responding to queries from Deputy Public Prosecutor Tan Yanying, the younger Mr Liew testified that his own relationship with Partiwas "not pleasant" as she had "very bad mood swings".

She had worked at his father's house for about eight to 10 years. The court heard that over this period, Mr Karl Liew, his wife and his father discovered that their some of their belongings had gone missing. 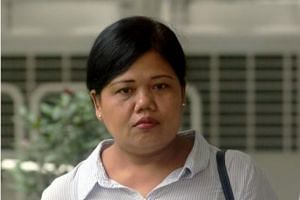 Although they suspected that Parti could be responsible for the missing items, her employers had no concrete evidence to show that she had stolen them.

Mr Karl Liew told the court that his father told him to go to the Chancery Lane house on Oct 28, 2016, to tell Parti to leave. The reason behind this was not mentioned in court.

The younger Mr Liew testified that he reached there at around 11am with an employment agent and gave her about three hours to pack up.

Mr Karl Liew left the house and when he came back later, he found that she had three sealed jumbo boxes. He told the court that she "demanded" that he pay for them to be transported to Indonesia and he agreed. Parti then left and returned to Indonesia.

He testified that the next day, his wife told him that he could not send the boxes without checking what was inside them. The family opened the boxes and found some of their missing items packed inside, the court heard.

"We were in a state of shock... My wife started to take pictures and videos of them," said Mr Karl Liew.

His father then alerted the police and Parti was arrested when she returned to Singapore on Dec 2, 2016.