SINGAPORE - Three court cases filed separately by three different men - all with one single goal in challenging the constitutionality of Section 377A of the Penal Code which criminalises consensual sex between men - will be heard in November.

The two other challenges were filed last year by disc jockey Johnson Ong Ming, then 43, also known by his stage name DJ Big Kid, and Mr Bryan Choong, then 41, who is the former executive director of the LGBT non-profit organisation Oogachaga.

All three cases argue that Section 377A is inconsistent with various articles of the Singapore Constitution. The Attorney-General has been listed as the defendant in all of the cases.

Section 377A criminalises acts of "gross indecency" between men, and the offence carries up to a two-year jail term.

All three cases will be heard in the presence of all the lawyers arguing for their respective plaintiffs on each of the dates, Dr Tan said in a statement sent to the media.

"The court may ask questions directed at the lawyers of the other cases while they are all in the courtroom at the same time."

He added that he looks forward to having a good hearing and is hoping to have Section 377A finally struck down with the novel arguments conceived of by his lawyer. 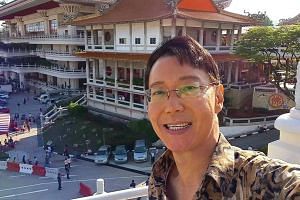 In court documents seen earlier by The Straits Times, Dr Tan had said that Section 377A is inconsistent with Article 9 of the Constitution, which states that no person shall be deprived of life or personal liberty save in accordance with law.

He also said that Section 377A is inconsistent with Article 12, which states that all persons are equal before the law and entitled to its equal protection, and Article 14, which states that every citizen of Singapore has the right to freedom of speech and expression.

Dr Tan said in a statement on Sept 25 that the challenge is based on "novel arguments".

For example, the public prosecutor has discretion on whether or not to prosecute an accused person under Section 377A, and the Government has said that the law will not be enforced against acts done in private, Dr Tan said.

He added that this is incongruous with Section 14 of the Criminal Procedure Code, which requires the police to unconditionally investigate all complaints of suspected arrestable offences.

"This subjects gay men to the potential distress of an investigation into private conduct, where they have a legitimate expectation that the state will decline to prosecute," Dr Tan said in his statement.