SINGAPORE - Fifteen months after he was given a prison sentence for intending to wound religious feelings, teenage blogger Amos Yee on Thursday (Sept 29) was again given a jail term for the same crime.

The 17-year-old was sentenced to six weeks' jail and a $2,000 fine in total for eight charges - two for failing to turn up at a police station and six for intending to wound the feelings of Muslims and/or Christians.

Principal District Judge Ong Hian Sun said Yee is not lacking in his mental capacity to make rational choices in the way he conducts himself, adding that he has the capability to do good or harm with what he does and says.

"He has, on several occasions, deliberately elected to do harm by using offensive and insulting words and profane gestures to hurt the feelings of Christians and Muslims. His contemptuous and irreverent remarks have the tendency to generate social unrest and undermine the religious harmony in our society," the judge said.

Amos Yee arriving at the State Courts on Sept 29

"It is therefore in the public interest that such conduct by (Yee) should not be condoned or tolerated by this court."

If Yee does not pay the fine, he will have to spend another 10 days in jail. He will start his sentence on Oct 13. 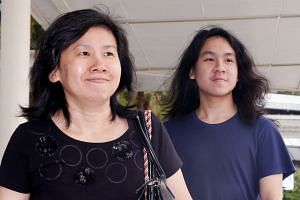 Deputy Public Prosecutor Hon Yi said: "This case is about an accused person who, even after a previous brush with the law for a similar offence, deliberately upped the ante by escalating the offensiveness of the material which he created. (Yee) cynically set out to wound religious feelings in order to gain attention for himself, and ultimately to profit financially from such attention."

DPP Hon said that although Yee is young, he is not immature, and "he knows full well the implications of his action".

"A viewing of his videos, laden with strong language and rife with comments aimed at insulting key aspects of the Christian and Muslim faiths easily bears this out. In sentencing (Yee), this court should send a clear message that acts which impugn the racial and religious harmony of this country will not be tolerated," DPP Hon added.

Defence lawyer N. Kanagavijayan said Yee is "deeply remorseful for all his acts".

Mr Kanagavijayan said: "(Yee) admits that he does not possess any religious, scholastic and/or intellectual ability to discuss religion. No religious leaders of the Christian and Muslim faiths have come forward to say that their religious feelings have been affected.

"(Yee) admits that his contemptuous and vituperative language that he had used ... shows his shallowness of his thoughts in respect of both Christianity and Islam."

On Wednesday (Sept 28), Yee threw in the towel on his three remaining counts of wounding religious feelings, pleading guilty to uploading one photo and two videos online, between April 17 and May 19, with the intention of wounding Muslim feelings.

The admission of guilt marked the end of his trial, which began in August. Yee's defence had yet to be called during the four-day trial.

Yee pleaded guilty to two charges on the third day of the trial on Aug 23. He failed to show up at Jurong Police Division at 9am on Dec 14, 2015, despite a police officer's notice. He also did not turn up at the same place at 9am on May 10, in spite of a magistrate's order.

Yee first came to the attention of the authorities when he uploaded an expletive-laden video on March 27, 2015, four days after the death of founding prime minister Lee Kuan Yew. Yee later also posted an obscene image on his blog.

He was convicted on May 12, 2015, and sentenced on July 6 to four weeks' jail. He was released the same day as the punishment was backdated to include his time in remand. He had spent about 50 days in prison after repeatedly breaching bail conditions.

For his two counts of failing to turn up at Jurong Police Division, Yee could have been jailed for one month and fined $1,500 per charge.

For his six counts of intending to wound religious feelings, he could have been jailed for three years and fined for each charge.